A surprisingly delicate gray-green tone that some designers even refer to as a renewed sage.

Evergreen Fog SW 9130 is a gray-green shade of paint from Sherwin-Williams, worthy of the closest attention today! The fact is that it is this color that the manufacturer declared the color of the year – 2022. According to Sue Wadden, director of color marketing for Sherwin-Williams, the Evergreen Fog can be called a symbol of rebirth, a new beginning, and the desire to actively interact with nature itself in order to stay in harmony with yourself and the world around you.

As stated above, Evergreen Fog is a surprisingly delicate gray-green tone that some designers even refer to as a renewed sage. According to Sue Wadden, for 2022, Sherwin-Williams designers wanted to find a color that would personify positivity and rebirth and evoke associations with active development, perspective, and naturalness. Initially, it was clear that only green can take on such responsibility – all that remains is to choose a shade.

For a long time, designers painfully chose between avocado and dark green until the decision came to them as if by itself. Calm and cool, soothing and instilling confidence that everything will be fine, Evergreen Fog became the undisputed winner of this kind of casting.

The Sherwin-Williams’ decision was also influenced by the vintage-style photo shoots using this wonderful gray-green color. It turned out that it perfectly retains the atmosphere of the past and provides an unconditional focus on organic materials and green plants. Moreover, it can create just such a cozy flair even in a modern interior. However, more on that later.

Evergreen Fog: is it warm or cold?

With enough light, this shade from Sherwin-Williams looks very welcoming, friendly, and quite warm, but still, it would be foolish to deny that it is much closer to cold colors. This effect provides a significant role for the gray tone, in which the presence of blue shades is very noticeable. However, let’s be honest: it would be too harsh to call Evergreen Fog cold – instead, it can be attributed to pleasantly cool tones since calm green most often gives a softening effect.

How does lighting affect Evergreen Fog?

Despite all the charm of Evergreen Fog, it must be admitted that this color is unpredictable, like a chameleon. Therefore, you need to be very careful with lighting when using it.

So, it has already been repeatedly noted that this shade completely fades into gray with poor daylight or insufficient natural light and looks rather harsh and cold. However, under the bright sunlight, green notes bloom in it, and it already seems very optimistic and life-affirming. Under the influence of bright artificial light, Evergreen Fog seems quite saturated, but the subdued intimate lighting allows it to come close to the natural and mysterious sage.

As we mentioned earlier, LRV, or light reflectance, demonstrates how intensely colored surfaces return the resulting light to the interior. This is especially important for shades with strong chromaticity, including Evergreen Fog, as it will help you determine what visual effects it is capable of.

The LRV for this color is 30, which makes it a mid-tone group. This means that you will hardly wait for a visual expansion of the space from it. However, it may well make the room brighter and more welcoming since it is lovely in itself, albeit without pronounced reflective properties.

The prominent undertones for this color are green and gray, which play almost on equal terms, and depending on the lighting, one side or the other wins. At the same time, it is impossible not to notice an expressive bouquet of blue undertones, which give Evergreen Fog calmness, pacification, and coolness and do not allow it to go away towards the grassy palette.

The shades of grays and greens that have become key to Evergreen Fog echo an impressive array of shades both within and outside the Sherwin-Williams palette. Let’s name just a few of the similar shades:

Sherwin Williams offers tremendous possibilities for creating contrast based on Evergreen Fog. In addition to SW 7568 Neutral Ground, SW 9122 Dried Edamame (pleasant warm beige), airy SW 6182 Ethereal White, and SW 7568 Neutral White (located opposite in the color wheel and at the same time relatively calm and light), the designers presented many additional colors in the collections for 2022. Among them:

Use of Evergreen Fog in interior and exterior

It is no coincidence that Evergreen Fog has become Sherwin-Williams’ 2022 color of the year: its cool friendliness and rare serenity proved to be appropriate in a wide variety of interior and exterior design options. We invite you to evaluate the solutions that designers especially liked.

In the style of the past

Even though Evergreen Fog has been selected primarily for contemporary interiors, decorators have found it most surprisingly influencing a design with old-world charm and rustic ease. Feel free to use it to decorate styles such as vintage, country, shabby chic, and French Provence – for each of them, this refreshing color will become a natural bridge between the glamorous past and the mesmerizing cozy modernity. 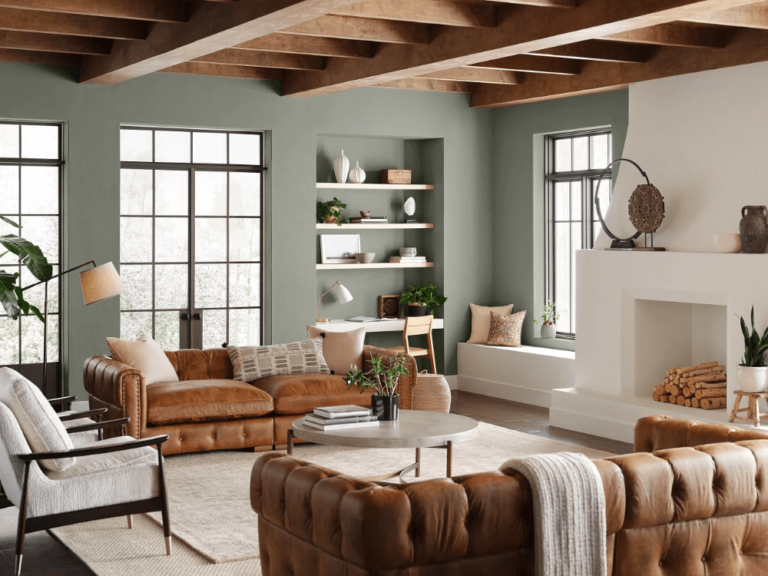 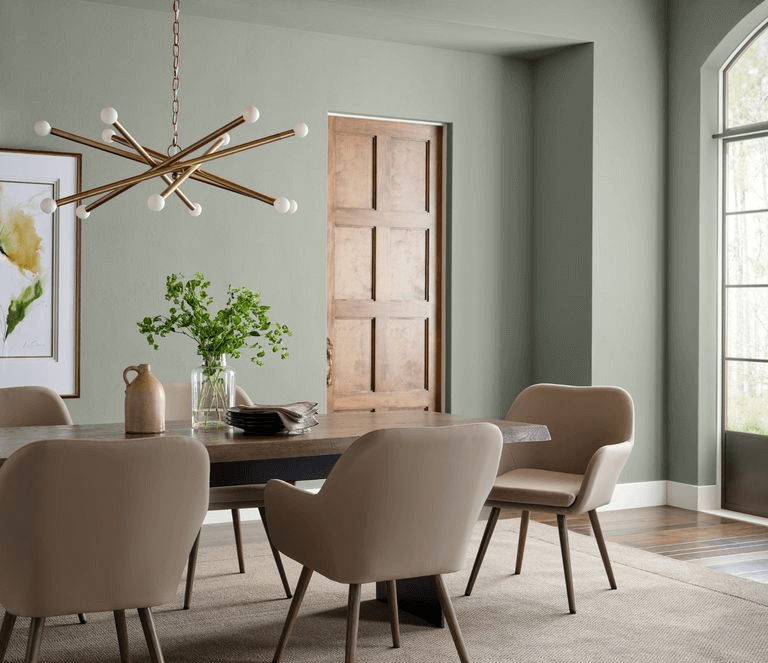 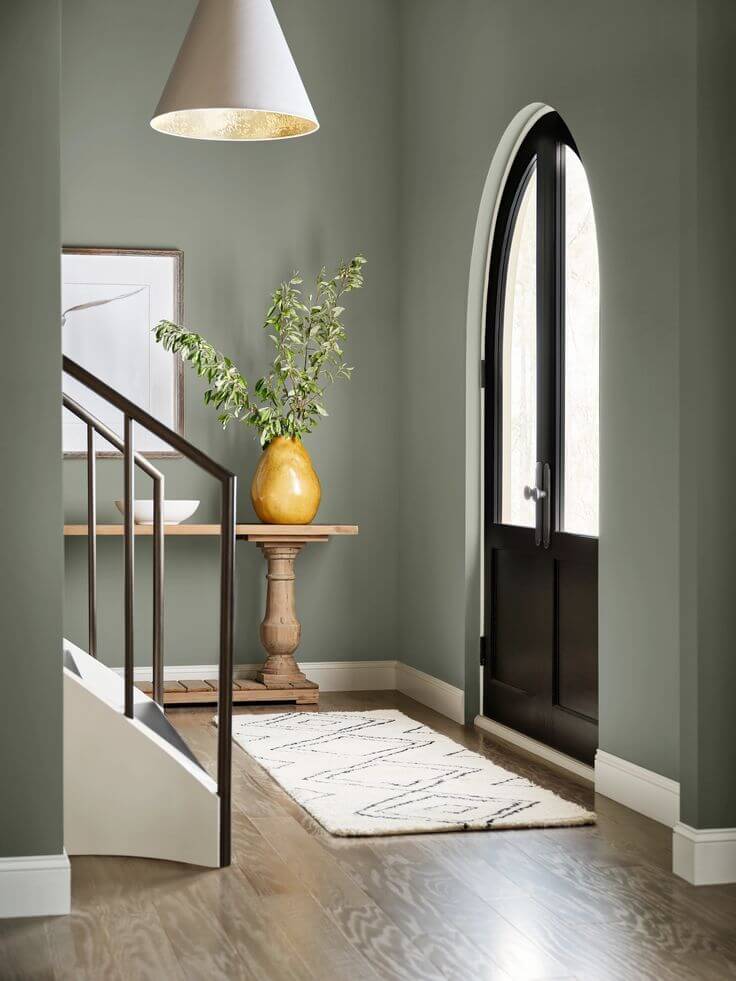 Evergreen Fog belongs to the so-called organic shades, which means its maximum naturalness. This is why it works so well with natural stone, wood, and textiles, as well as a variety of decor options made from recycled materials. This gray-green color will make you fall in love with eco, even if you were neutral to it before. 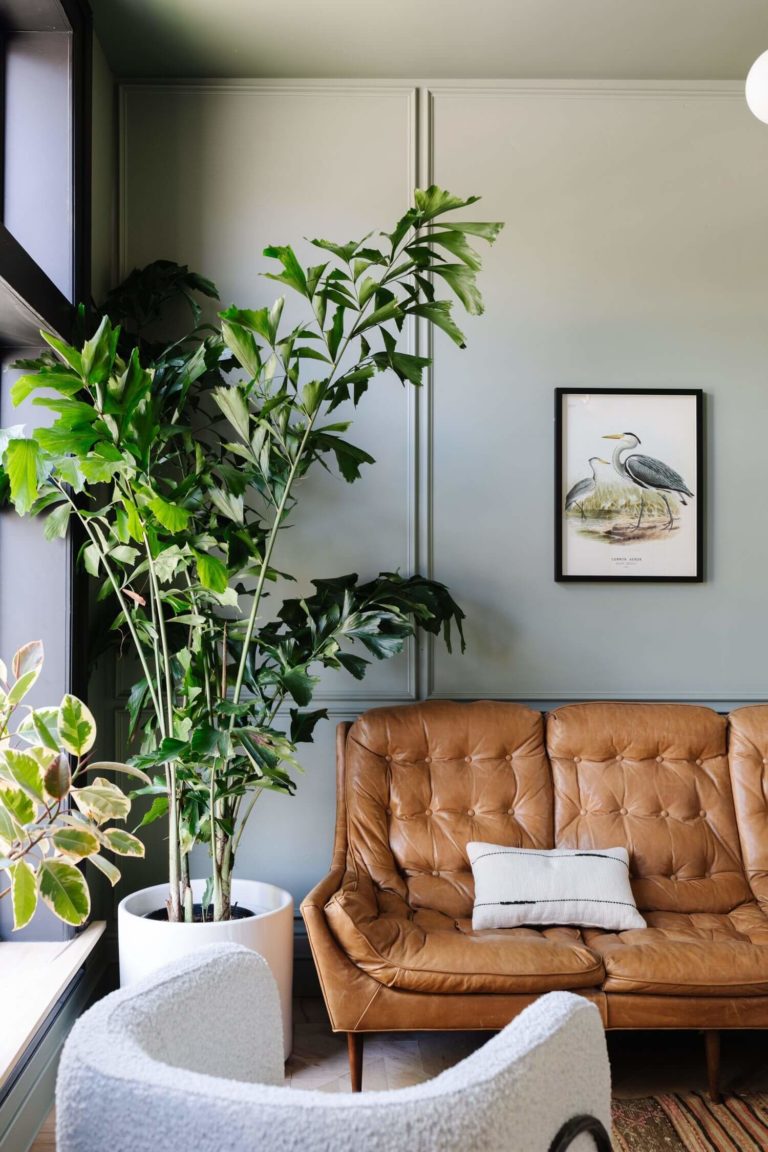 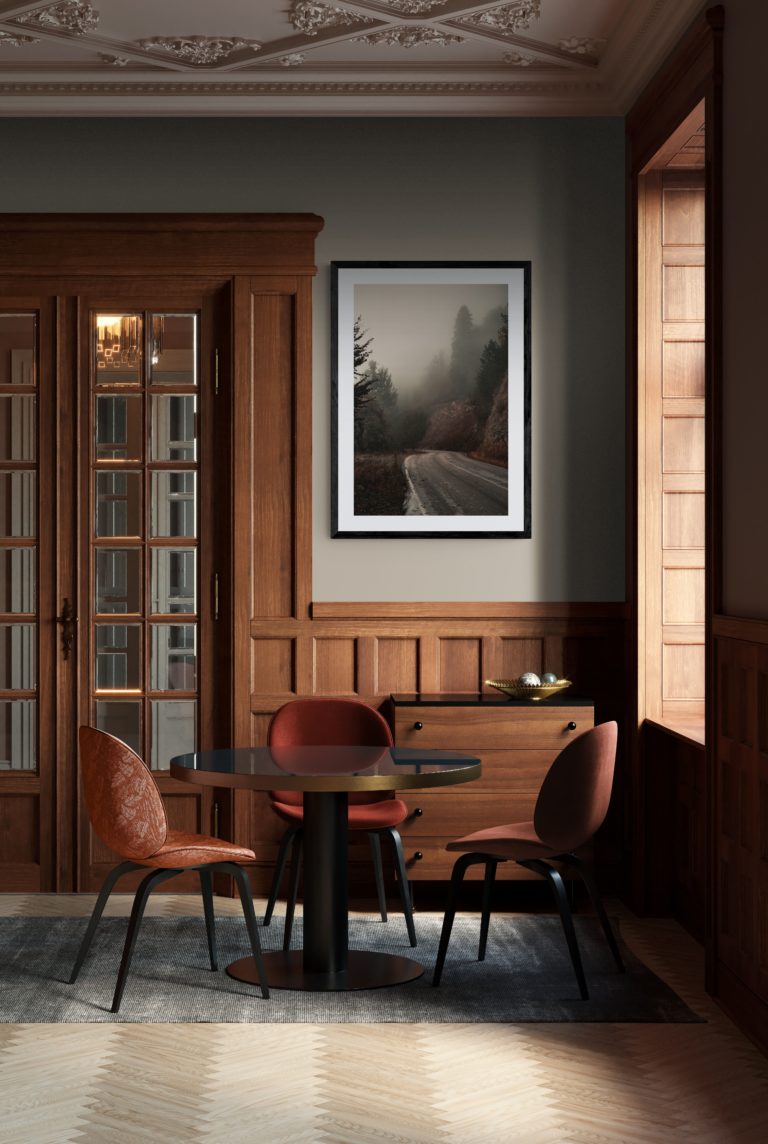 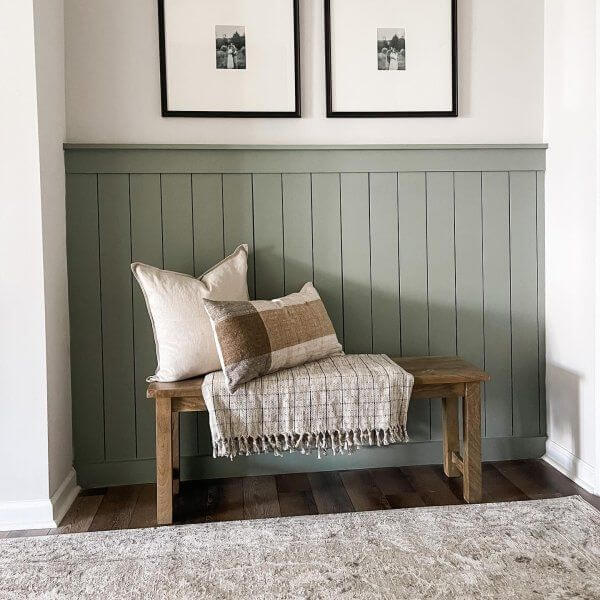 While the combination of Sherwin-Williams color with natural wood textures seems genuine, we have to admit that the combination is breathtaking every time. That is why the designers suggested adding this shade to the interior palette of the Scandinavian style – here, Evergreen Fog will become an excellent background for unpainted wooden furniture, natural textiles, and black and white accents. 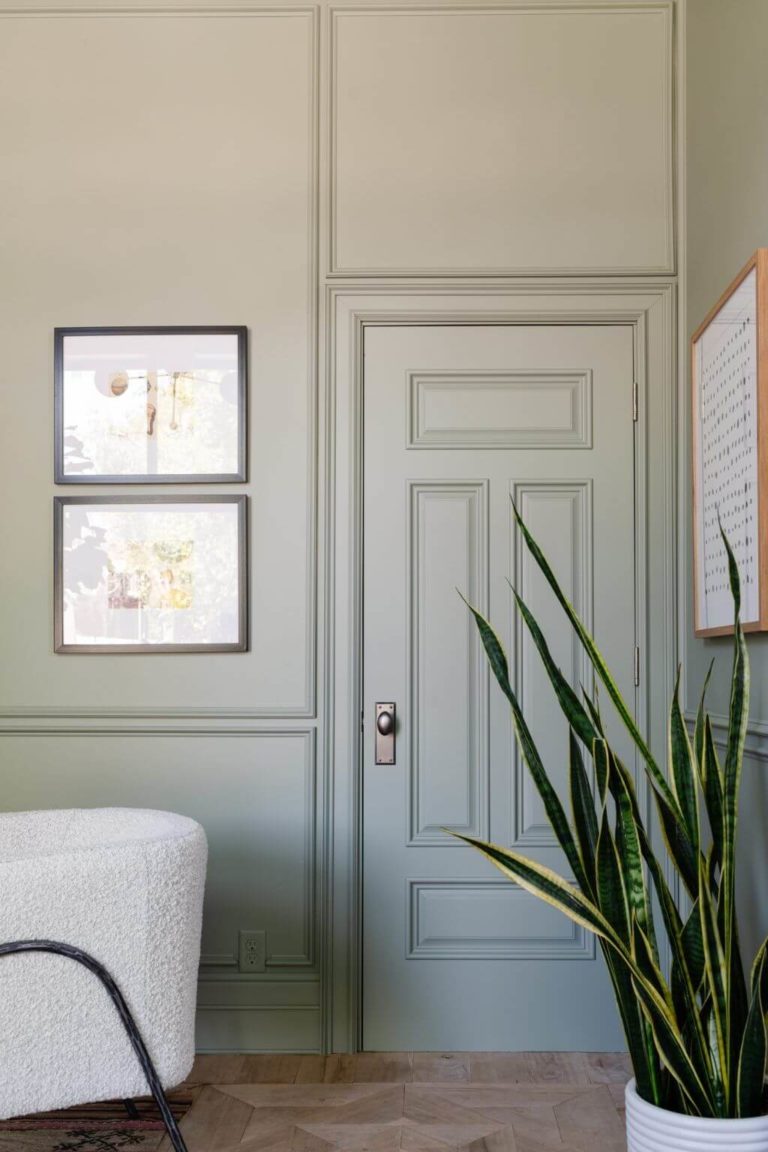 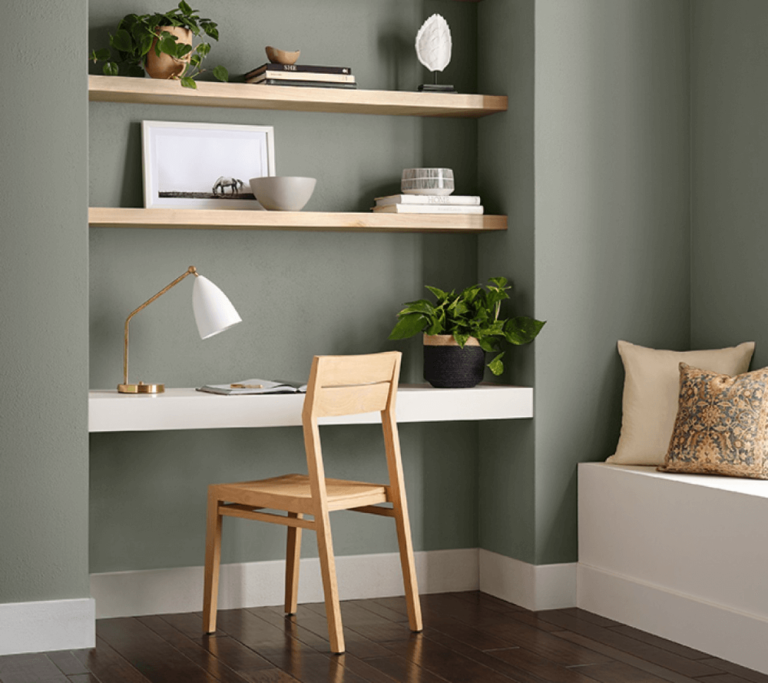 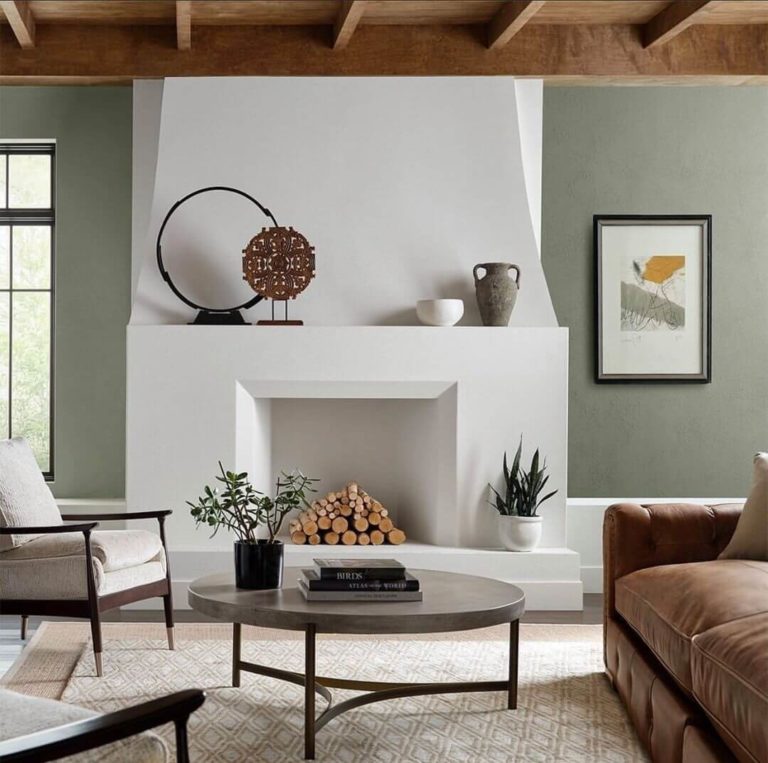 We are deliberately not talking about the use of Evergreen Fog in the interiors of a bedroom, living room, kitchen, or dining room – and what can you say if its organic nature and versatility are already recognized all over the world? However, we want to warn you about the bathroom: if you take good care of yourself and take care of your appearance, then you should not paint all the walls in a gray-green color: with the wrong lighting, your skin will acquire an unhealthy yellowness, and you will not only be unable to apply the make-up correctly, but you will also be terrified for your condition.

If, despite this, Evergreen Fog beckons you just as much, look for compromises: paint furniture in this color or look for brighter fixtures. 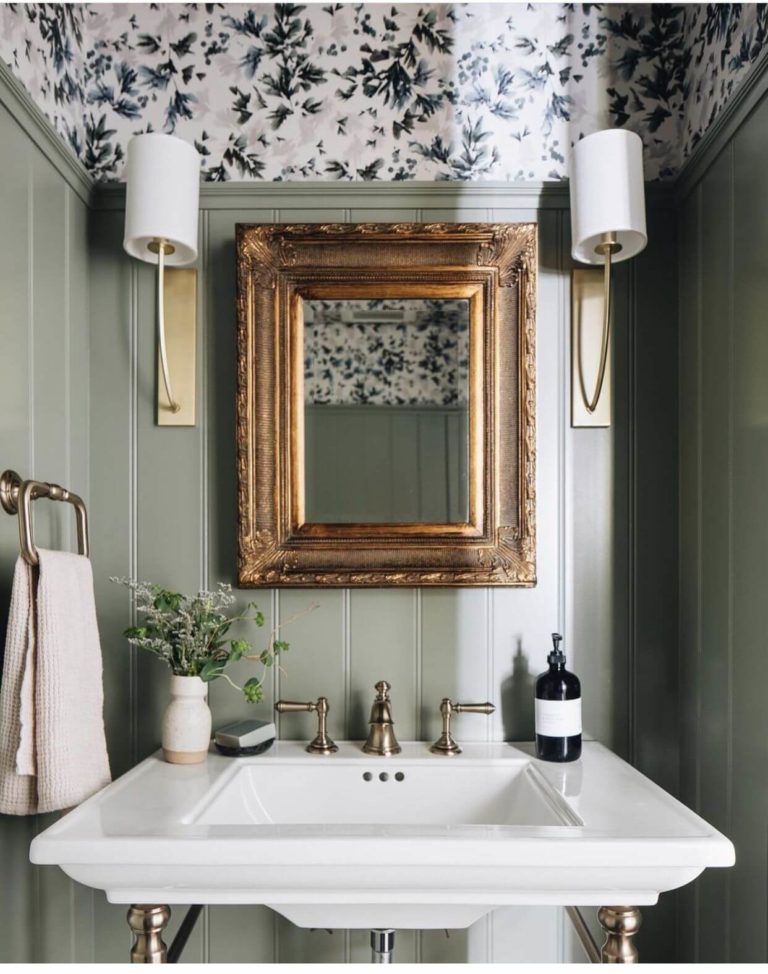 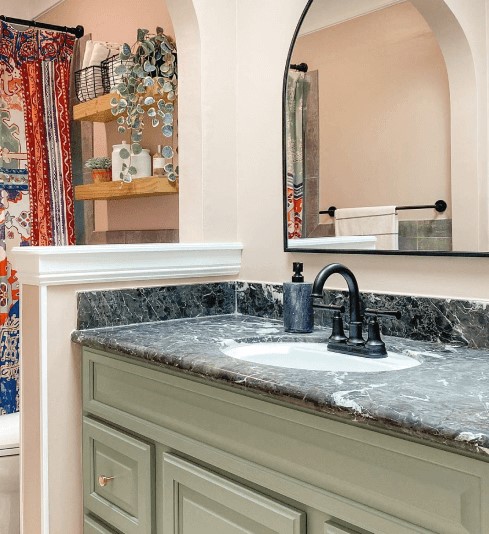 For the exterior walls of the house

A house in the color of a greenish fog is not immediately apparent. However, over time, you can appreciate its ability to favorably emphasize the construction lines and integrate the house into the surrounding nature. In addition, this shade leaves room for experimentation: if you want the ease of country – add doors in white, gravitate towards elegant classics – architectural elements in black and dark brown will come to your rescue. 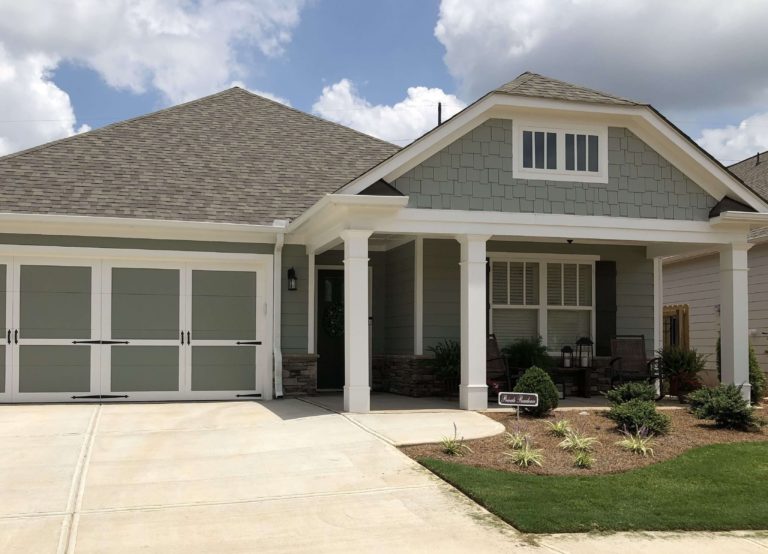 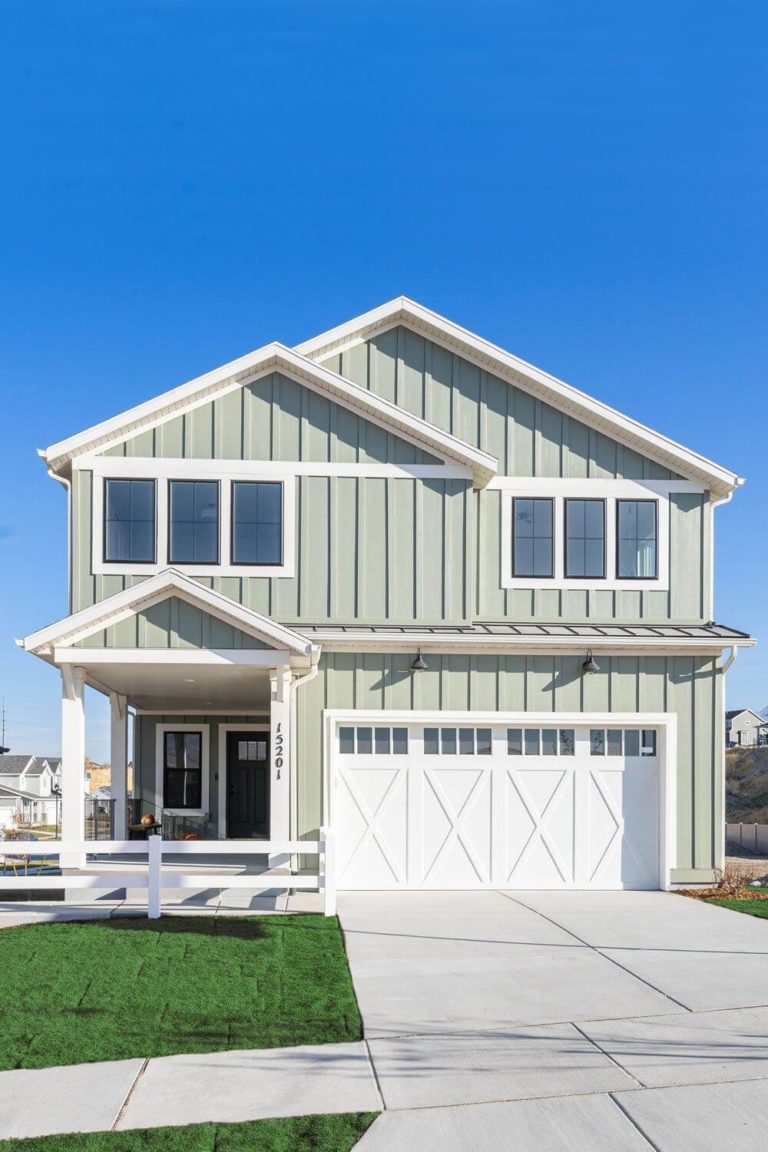 The color of 2022 from Sherwin-Williams has become another symbol of a new period in our life – a period of closer proximity to nature, tranquility and acceptance, rebirth, and a positive outlook on the surrounding events. If your confidence is seriously shaken and you need some relaxation, consider painting at least one surface in the house in the beautiful shade of Evergreen Fog.