The most talented masters of world design sometimes remain stars throughout their lives. Every expert in this field knows their names. The fame of these designers crosses the borders of states, and their work acquires global significance. Here are some of them.

She compares design to the art of cooking and considers her style to be unrecognizable. Still, Paola Navone has some characteristic features that make her stand out among all the world’s designers. An active traveler, she fills her interiors with Eastern culture notes according to the principle “East meets West”.

Paola’s interiors are easily recognizable by their characteristic blue or turquoise hue and the fish’s motif, which appear either in the form of a jug or in cabinet handles. She also doesn’t like minimalism. In one of her interviews, she admitted that it is challenging to maintain minimalism in a residential apartment – and even more challenging to live in it, because its atmosphere can be destroyed by anything brought from another trip. And this opinion is not accidental because Paola Navone was a pioneer of anti-design, which has always opposed all kinds of dryness and asceticism in the interior. 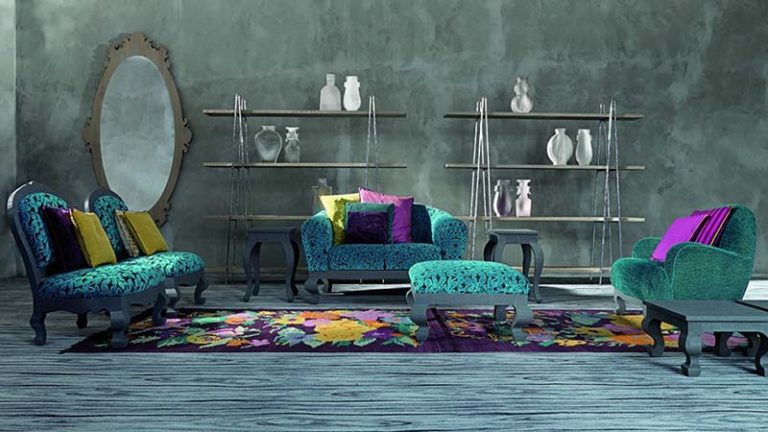 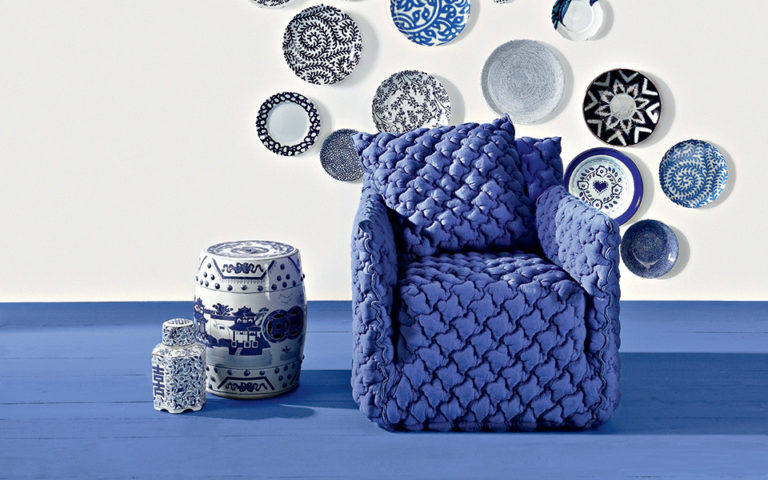 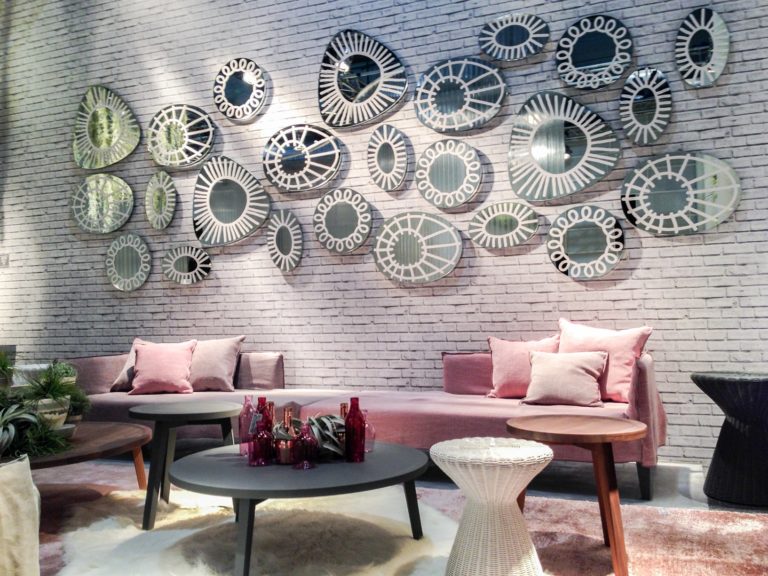 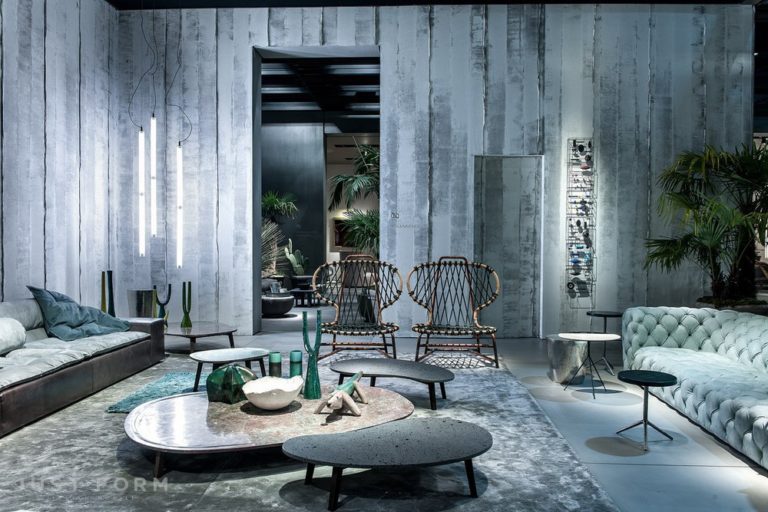 India Mahdavi’s designs show a touch of the sunny South. In Persia, she was born in the family of an Iranian and an Egyptian to become the famous lady of Foggy Albion later. Light is the most important detail in her work. And the use of bright colors adds light to her interiors.

Today, the work of India Madavi is at the peak of modernity because her favorite color blocking technique has regained its former popularity. This technique, which was in vogue in the eighties and nineties, implies a collision of bright colors in one interior.

Among Mahdavi’s projects, you can easily find interiors with blue, green, and pink walls. She is also characterized by lovely velvet in the upholstery, sometimes in combination with pink or ordinary gold. She is especially famous for the restaurant’s interior, made almost entirely in one delicate pink shade. And, by the way, it was she who introduced the fashion for this color. 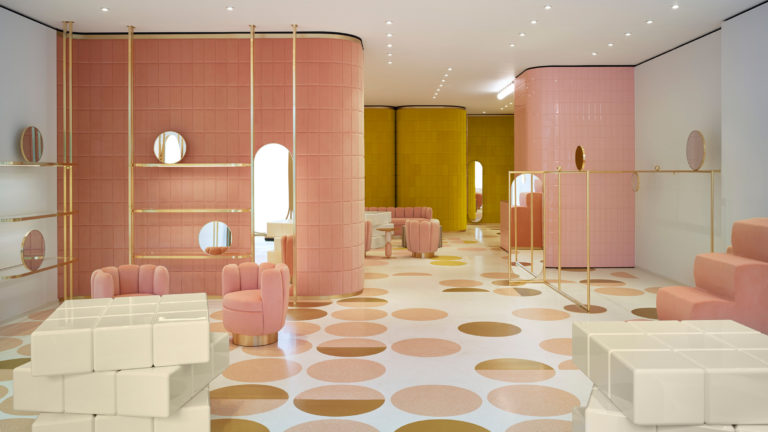 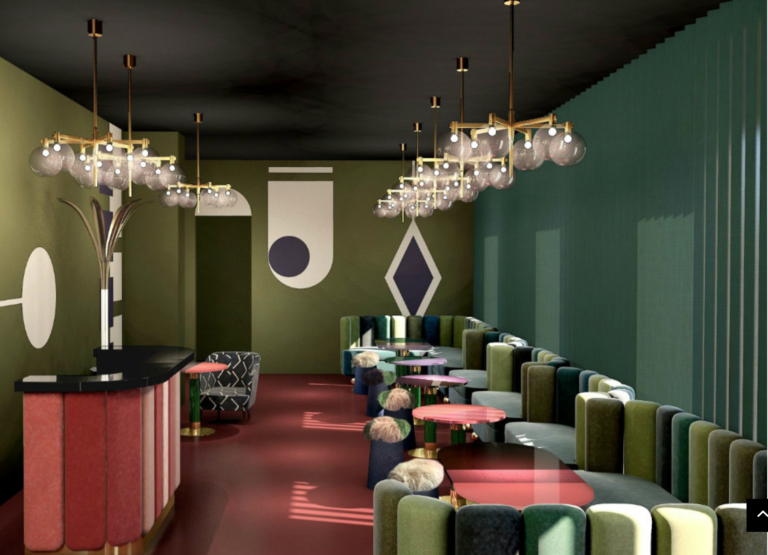 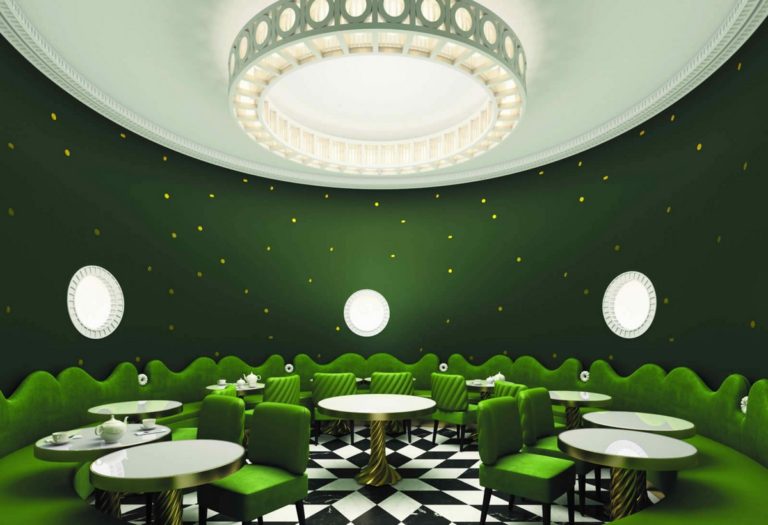 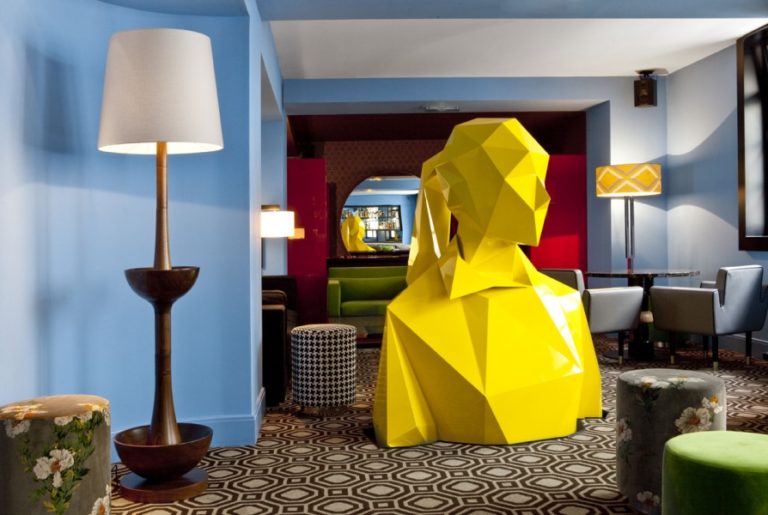 While some designers create vintage interiors, Karim Rashid designs the shapes of the future. He uses mainly man-made materials, taking inspiration from plastic. Rashid’s characteristic colors are caramel, and the shapes are streamlined. Contemporary patterns combine with bold, brittle space. Rashid’s distinctive features are patterns in the form of neon waves, rings, shapes, and curves in the spirit of computer graphics. In one of his interiors, Karim Rashid used columns in the shape of bionic trees, and in another, he placed a nougat-colored sofa against the background of large oval holes into which the wall was transformed. Rashid’s primary color is pink, and black, in his opinion, is too pessimistic, while he calls pink “the new black”, and even wears a pink jacket.

Not so long ago, he created an interior for himself. He moved into this apartment as a happy spouse (he married a girl from Serbia, Ivanka Purich). The spouses consulted with each other in everything, making almost the same decisions. It would seem – the perfect couple. But family life soon collapsed – and not for the first time. And the beautiful interior remained. Karim Rashid is the most expensive designer of our time. The owners of private apartments do not order his services – it is too costly. The top designer deals with projects of the public environment. 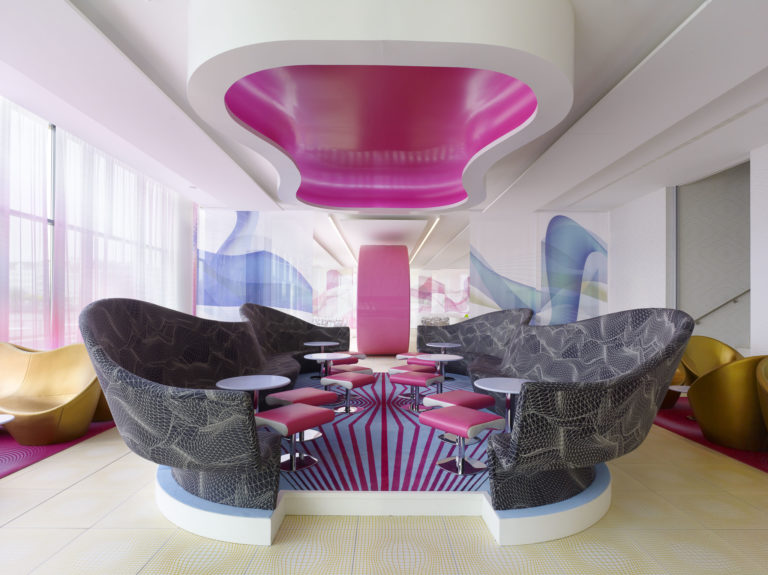 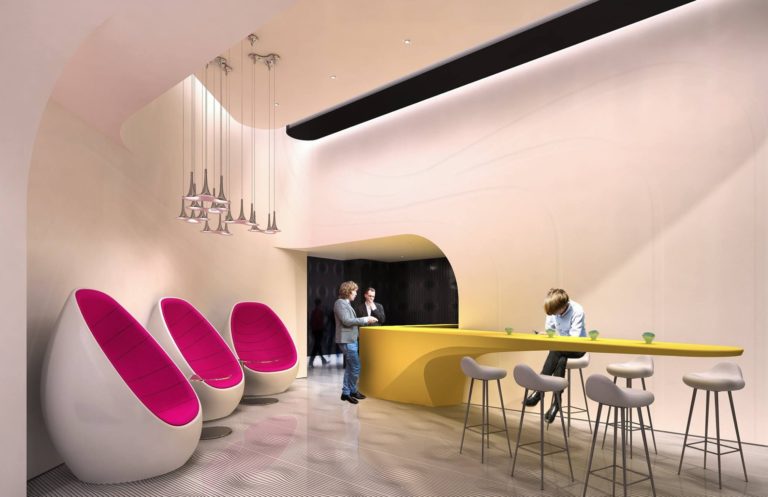 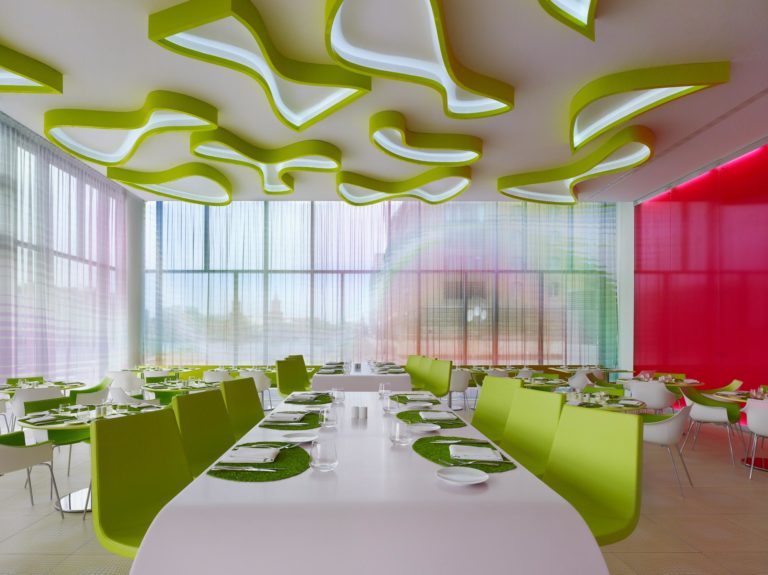 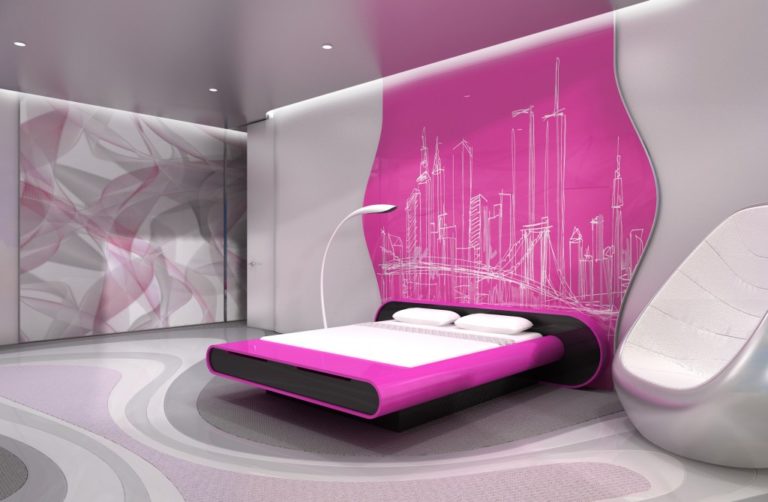 We all dreamed in childhood. But only a few have dreams come true. This happened to a woman from Belgium named Roos Van de Velde. In her youth, in boring lessons at school, she invented a fantasy world in the spirit of Robinson Crusoe. She dreamed of living in a hut on a distant island and eating from dishes made of leaves. As a result, instead of an island, she settled in a wild garden. And, although her dwelling is located in the middle of the city, the person who is there does not leave the feeling of virgin nature.

Detailed sketches of children’s fantasies helped her create porcelain dishes with unique, imperfect natural forms. Her oyster-shaped lamps, flower petal-shaped plates, seem to be breathing creatures, soft and natural in appearance. Her tableware is bought by the best restaurants today, but her house’s interior, reminiscent of fairies’ fantasy houses, is no less famous. All furniture in this house is made of rough wood, and one of the doorways is made as a hole or crack in the wall. Wood and ceramics are the designer’s favorite materials, and they dominate in her work, which serves as a visible embodiment of a childhood dream. 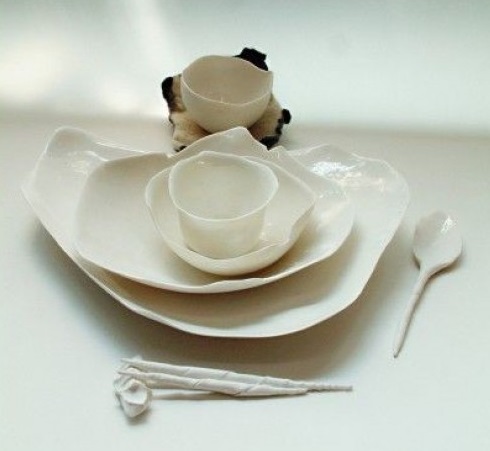 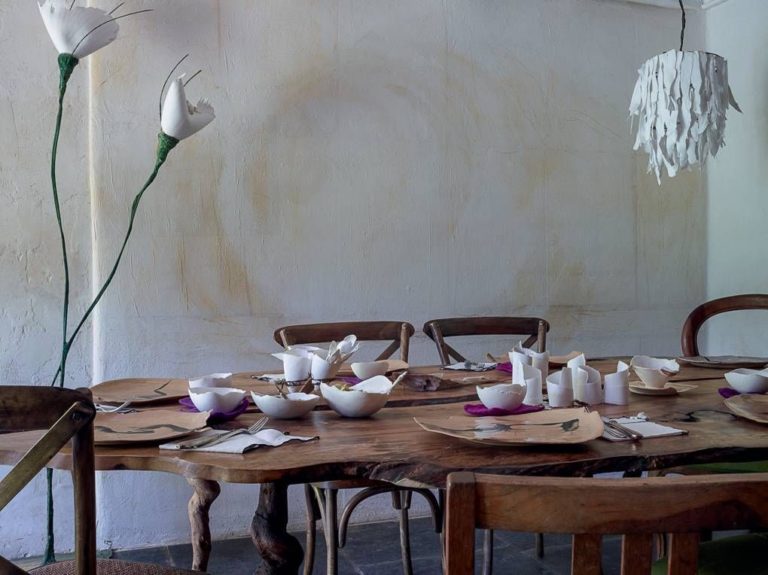 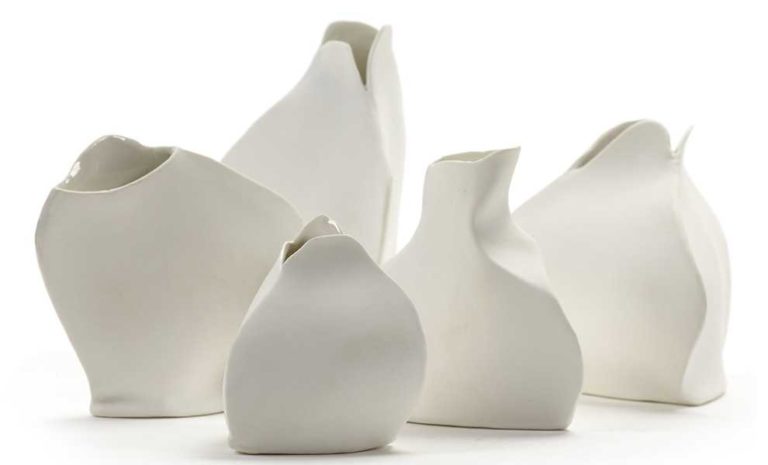 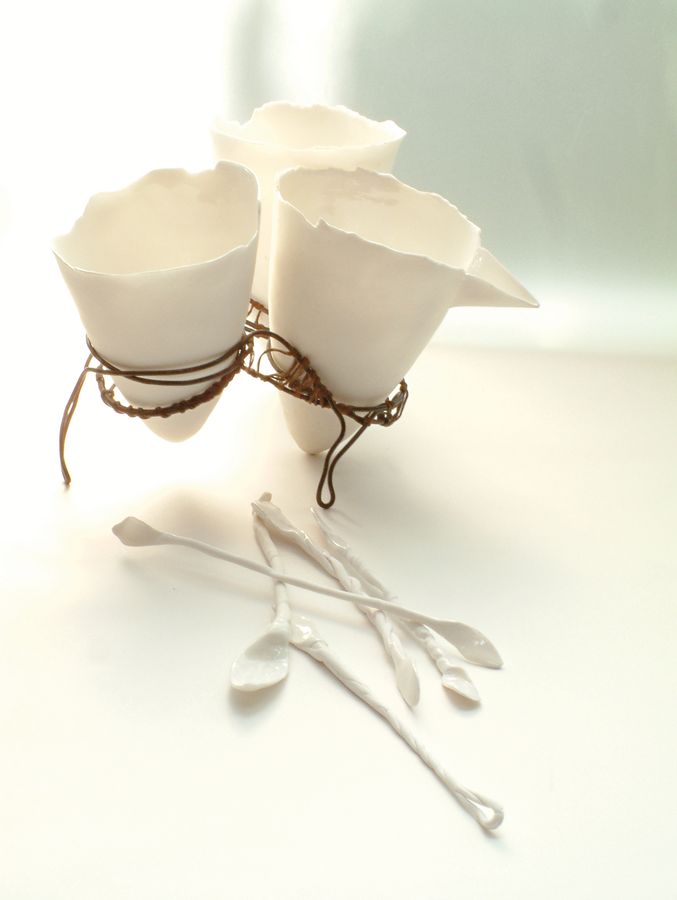 Ettore Sottsass’s style shone in the world of interior design in the golden eighties. His style is still unique and recognizable to this day. Sottsass was imbued with the spirit of post-war postmodernism and created designs that defied boredom and the “good taste” of modernists. His designs are furniture reminiscent of strange children’s toys, consisting of abstract figures. The same ornaments and patterns are used to build wallpaper designs in these unthinkable interiors.

Sottsass is also no stranger to the fascination with exotic cultures. On this subject, he created furniture that he called “modern totems”. Ettore Sottsass was one of the most important Memphis group members, whose work was radical for its time. 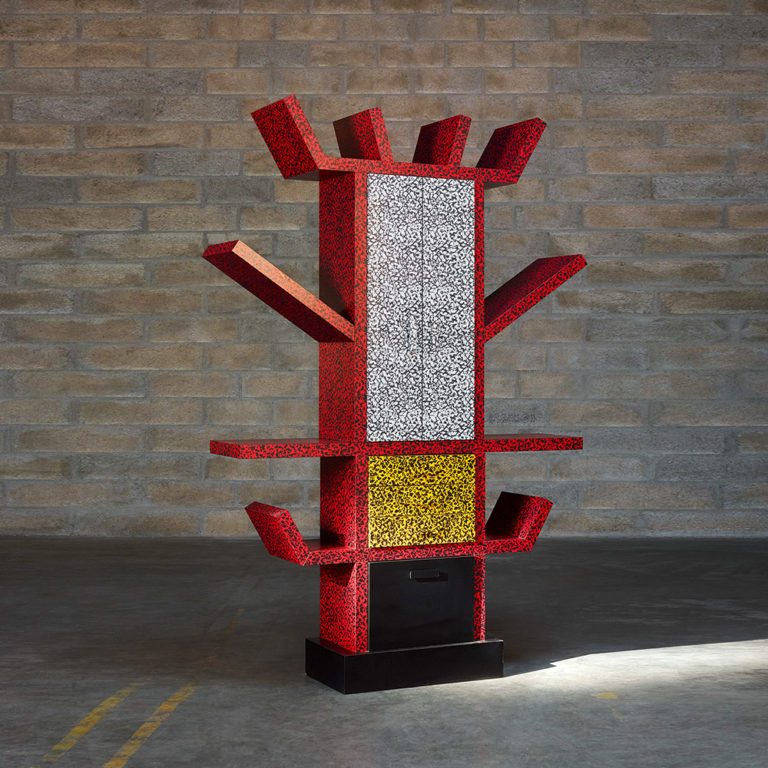 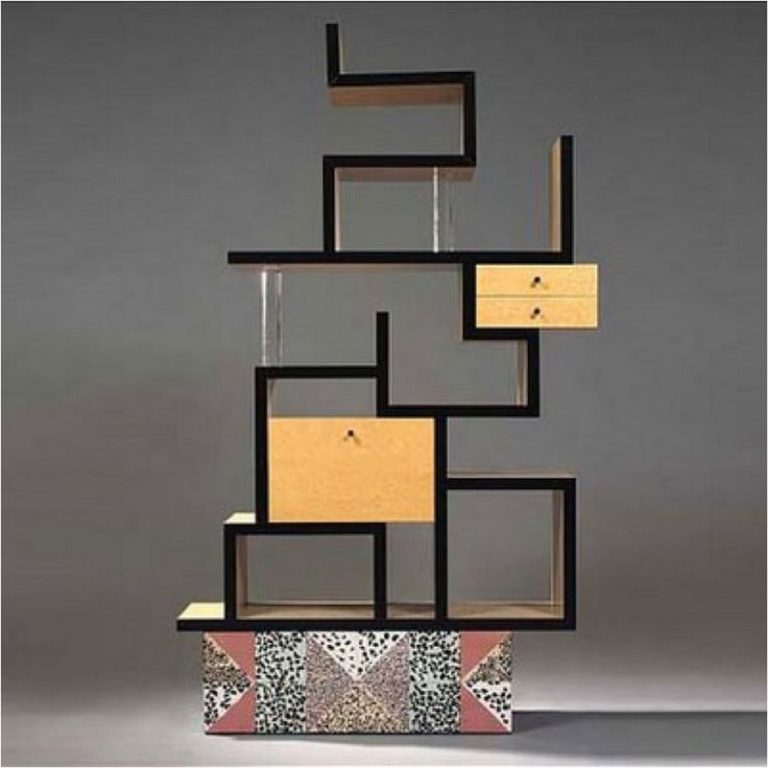 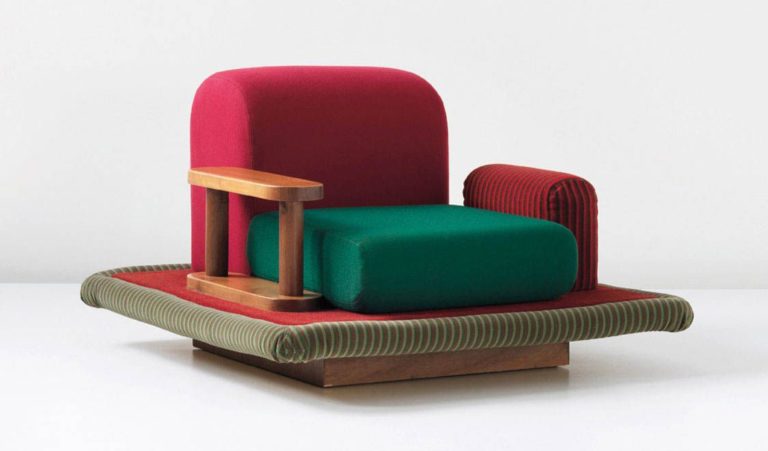 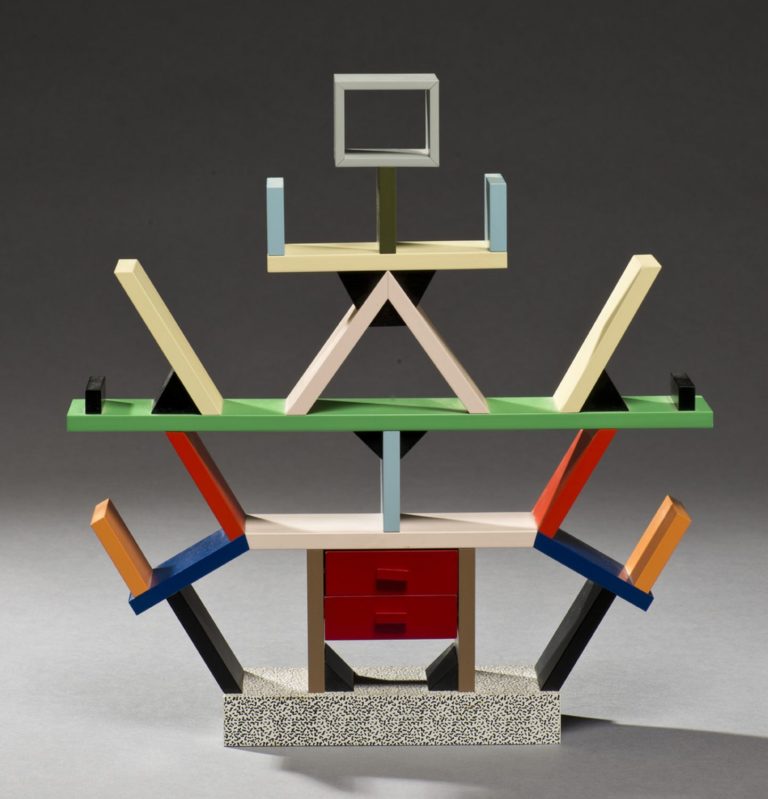 Famous designers amazed and amaze the whole world with their unique author’s vision and vivid personality. And design does not stand still, and every year young designers and entire groups, sometimes from countries not most famous for their art, appear on the front pages of fashion magazines. The old masters have worthy successors, so the “end of art” is not about design!