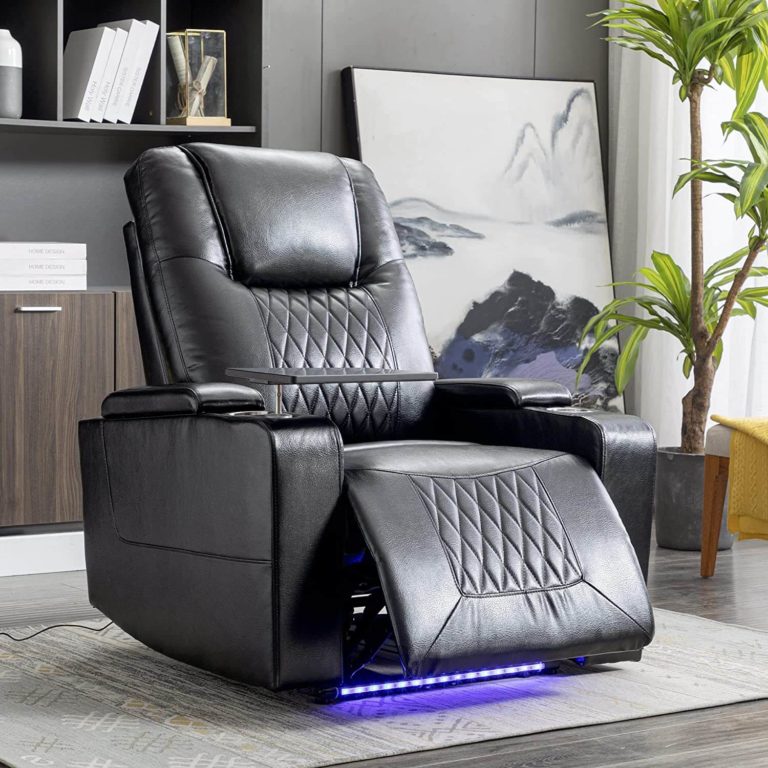 We all love our power recliner, and it’s our favorite piece of furniture. Unfortunately, reclining armchairs are not ideal, and they tend to break from time to time. In this article, we want to discuss different problems with a recliner and tell how to fix this problem.

A power recliner may not be working correctly if it is not producing the expected movement of the footrest and backrest. A quick check before using your power recliner for the first time can ensure that there aren’t any problems with how the manufacturer has installed the controls. If you notice a problem after putting pressure on either of these control levers, there could be several issues, including:

The cable controlling whether your footrest goes up or down can become loose over time. A simple tightening should allow you to relax once again without worrying about getting woken up by a sudden extension.

If a gentle tug does nothing to tighten this wire, then it is likely that the cable has broken. Expect some difficulty loosening this piece since the manufacturer designed its housing with a firm hold in mind.

If your footrest does not budge, it may be time to consider replacing the whole part due to repeated use or damage. The screws attaching this part are generally very sturdy but repeated stepping on them can cause breakage if they are exposed enough times. This material can also become bent over time, so you might see some visible metal warping even if no screws have come loose yet.

If your footrest doesn’t move, but you can still raise and lower the backrest, then the Lazy-Boy recliner problem may be with the wire connecting the hand control to your best power recliner with heat and massage. You will want to get down on your hands and knees and feel any obstructions in this wire if you find something strange, like a bit of broken metal inside the leg of your power recliner.

There is a higher chance that something has damaged this part of your home. Besides, it can even be a small child who has tried their hand at climbing into a powered recliner. A replacement should do the trick for bringing your seat back up to working order again.

If you cannot get your power recliner back to its original position, no matter what you do, there could be a problem with the control panel. This part can become worn out over time if used often or if water has contacted it at some point, and it may simply stop working, which is not something that any of us wants to deal with after spending so much money on this comfortable seat.

The mechanism is tilting to one side

While some power recliners are not intended to tilt on one side, there is no harm in using yours for this purpose. That being said, if you notice that the leg of your power recliner appears to be tilting towards one side while you sit down, something is wrong with how it has been installed. This may cause your footrest not to rise thoroughly once again.

The most dangerous thing is that it could pose a danger for those who do not realize what is going on. While fixing this issue can involve repositioning parts within the recliner’s frame, take care when doing so as these parts often have sharp edges that can cut skin or snag clothing. If you end up sending a sharp object into a piece of fabric only to have an armrest fall off, you can expect to spend some time dealing with this issue.

There are usually two main headrest issues that people will experience with their power recliner. The first is a broken or detached headrest, which the same process can solve as the footrest issue described above. A loose connection between this piece and the wire controlling whether or not it is attached to your chair can cause severe problems since you will most likely end up sitting on it for hours at a time. You may find yourself with an uncomfortable neck or back if you do not take care of this issue quickly because one side’s entire support system will no longer be present.

Quick Tip: If water gets into your power recliner, use a soft dry cloth to wipe it down before running again, so you don’t cause added problems.

The second issue involves a headrest that is either too high or too low, which can be adjusted by moving it up or down as needed. However, the power headrest on your chair may have been jammed into one position and will not move at all due to repeated use over time. In this case, you will need to detach the piece from its housing and reattach using superglue instead of screws to get it back into place. This problem should only occur if your recliner has been used heavily for an extended period since there is no risk of it happening naturally with just owning the product, even if you sit on it every day for hours at a time.

If your footrest is not moving when you press the up or down button on your power recliner, it has most likely developed a problem with one of its wheels. Natural wear and tear over time is a regular thing. Besides, damage due to trapped wires prevented proper function in the power supply for this part. If you are comfortable doing so, you will want to remove this wheel using pliers and superglue to get back into working condition again. Your leg rest should work fine after this repair, but if you find yourself still having problems with mobility, there may be an issue with the platform inside the chair itself rather than the wheel suspension system underneath it.

While several issues may cause your new recliner not to work correctly, these problems are certainly not something you should have to deal with after spending so much on it. If no matter what button you push or lever you pull, your new power recliner simply will not move again due to an internal problem, send it back for either repair or replacement at once! A good warranty period might be the only thing keeping you from having to pay for this mistake!