Five iconic lamp designs which everyone should know

Five iconic lamp designs which everyone should know

There are many things in interior design that are commonly called a cult. This concept is used concerning furniture, decor, art objects – and lamps are no exception. It is such things that gradually become a kind of classic. Their presence in the room gives its decoration a special meaning and demonstrates the owners’ extraordinary taste.

Today in stores, you can find many unusual, extravagant, and even absolutely insane-looking lamps, but not all of them are awarded the title of “iconic”. As a rule, the list includes items about which the following statements are factual:

From time to time, design magazines present their ratings and hit lists of iconic lighting fixtures. We also offer you our version of models for all times, which will allow you to make the lighting of your home genuinely stylish.

Even if you are indifferent to designer lighting, the Vertigo pendant lamp will not be left without your attention. At the same time, the spectacular and graceful design of the model, the name of which translates as “dizziness”, mesmerizes and makes you reconsider your vision of light in modern interiors. And a similar thing happened thanks to the young French designer Constance Guisset.

Constance designed this pendant lamp in 2010 specifically for the Petite Friture brand. Then she was faced with the task of creating a lamp of a large size, as graphic and light as possible, airy and weightless, enchanting with its geometry and at the same time preserving a sense of intimacy. Guisset fully managed to cope with everything: it is not surprising that Vertigo, presented at one of the interior showrooms, made a real sensation. And today, almost 10 years later, this “dizzying” suspension will be an honor to any modern interior, which implies laconicism and at the same time is not alien to the original, in some ways even futuristic details.

Vertigo has not undergone any significant changes during its existence – except perhaps for the added color schemes. Even after glancing at the lamp once or twice, you can easily recognize it – by the radial louvered lampshade and velvety-coated polyurethane strips. The combination of architecture and materials allows the luminaire to come to life from any air movement, giving the surrounding space a sculptural and mysterious effect due to the unique play of light and shadow.

The Vertigo has become noticeable not only because of its unique design but also because of its dimensions. Constance Guisset initially sought to design a large lamp, not only because of the desire to do everything on a grand scale but also to create a cozy atmosphere: according to her, under such a wide rounded lampshade, everyone can feel protected and relaxed. Today this model is available in two diameters – 140 and 200 cm, and buyers can choose a solution following the design project for their house or apartment.

As for the colors, the choice is much broader – the brand offers lamps in black, copper, white, green, and pink, and therefore buying Vertigo to match the palette of a living room, dining room, or even a bedroom will not be difficult. 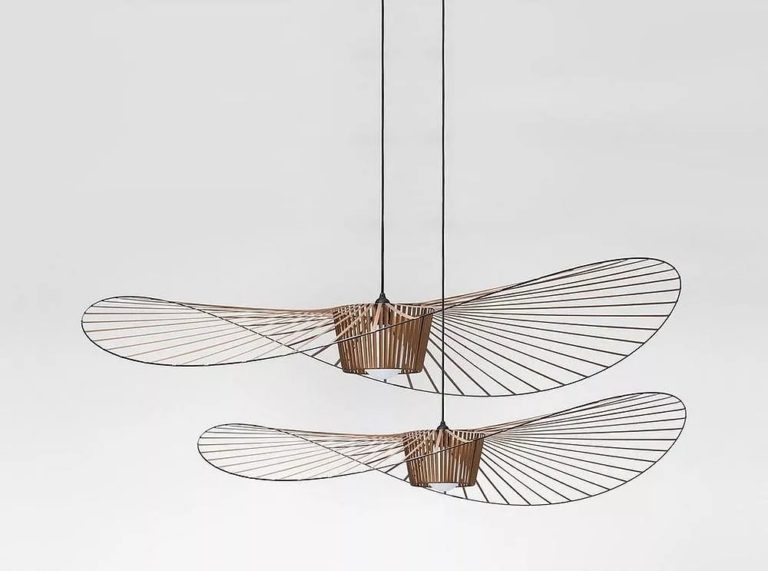 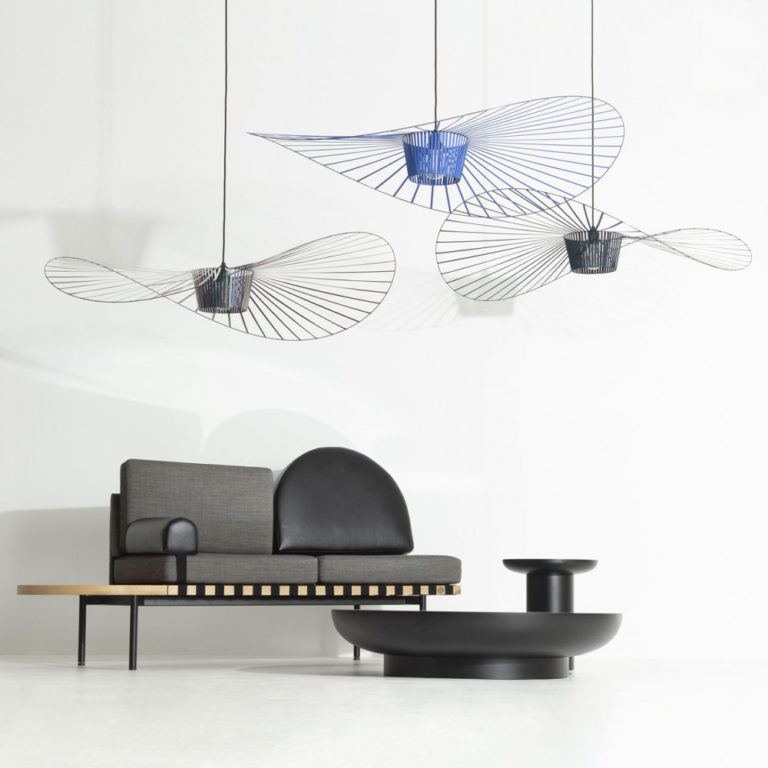 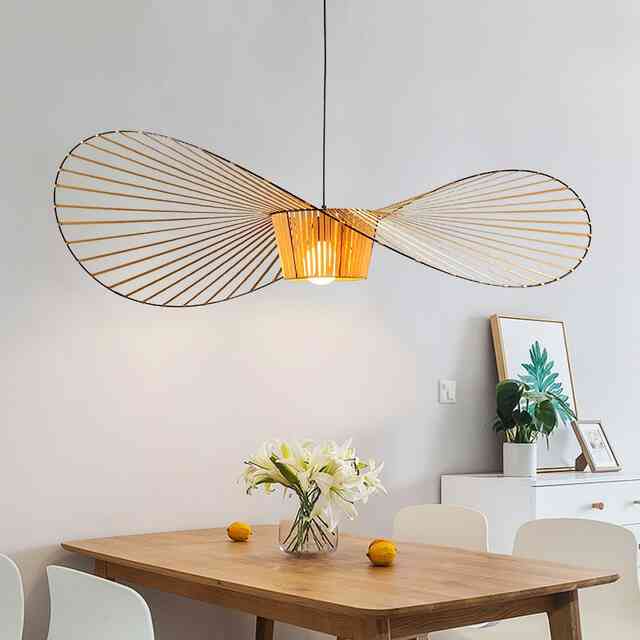 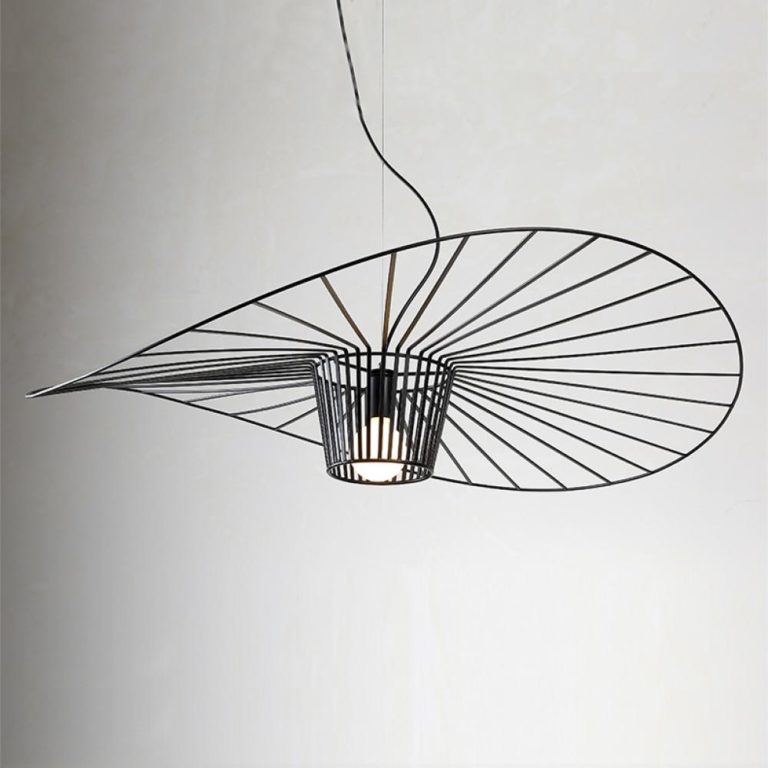 Until the 60s of the last century, everyone knew precisely what a floor lamp should look like. A strictly vertical base of metal or wood, a lampshade in the form of a truncated cone or cylinder, a sense of classic elegance – all this seemed unshakable and self-evident. The dominance of traditional models lasted until 1962 when the Castiglioni brothers – architect and designer – came up with a new floor lamp, which is still very common today in homes and apartments worldwide.

As Achille and Pier admitted, the Arco design was greatly influenced by a street lamp’s appearance. And this is noticeable already at first glance at the floor lamp – by the hemispherical metal lampshade, which is attached to an extremely long arc and by a massive base that reliably holds this impressive structure. Herewith this arc is composed of movable telescopic elements that allow you to adjust the height of the lamp and the range of illumination, and for the base of the first models, a block weighing 70 kg of white or black marble was used.

From time to time, designers adapt Arco’s design to modern realities – for example, by changing the hemispherical steel lampshade to a cylindrical fabric, playing with a tripod in different colors, and using a metal or even wooden base instead of a marble base. However, no matter what changes are made to the floor lamp’s appearance, it still retains a fantastic property – it never bothers and does not seem secondary. Today, floor lamps continue to decorate the most fashionable and exclusive interiors while maintaining the title of iconic interior items with dignity. 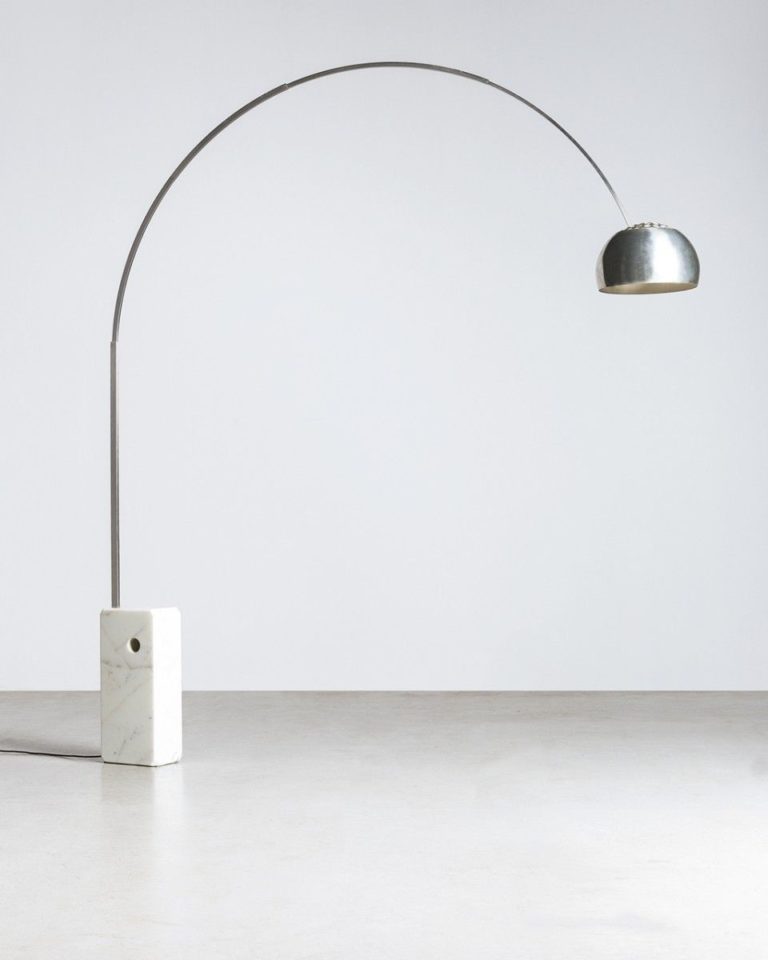 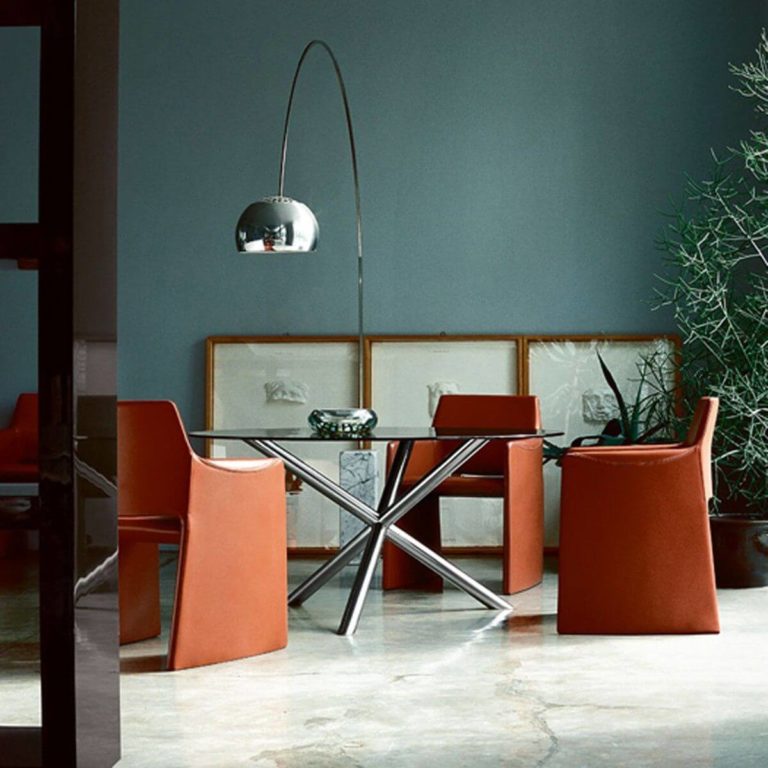 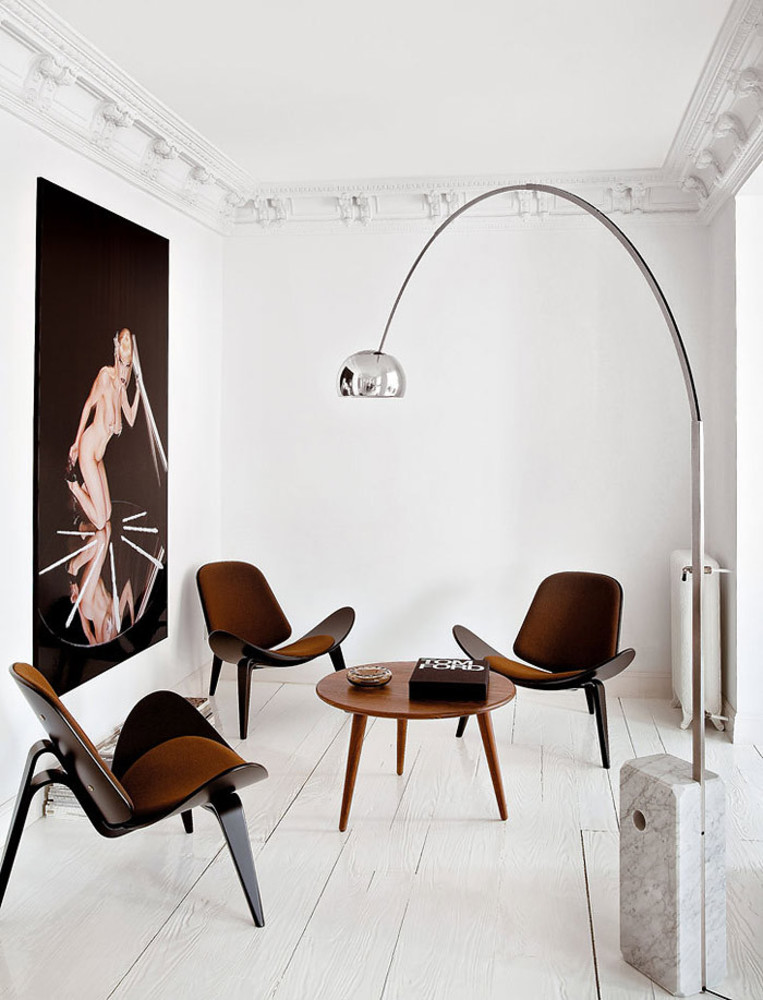 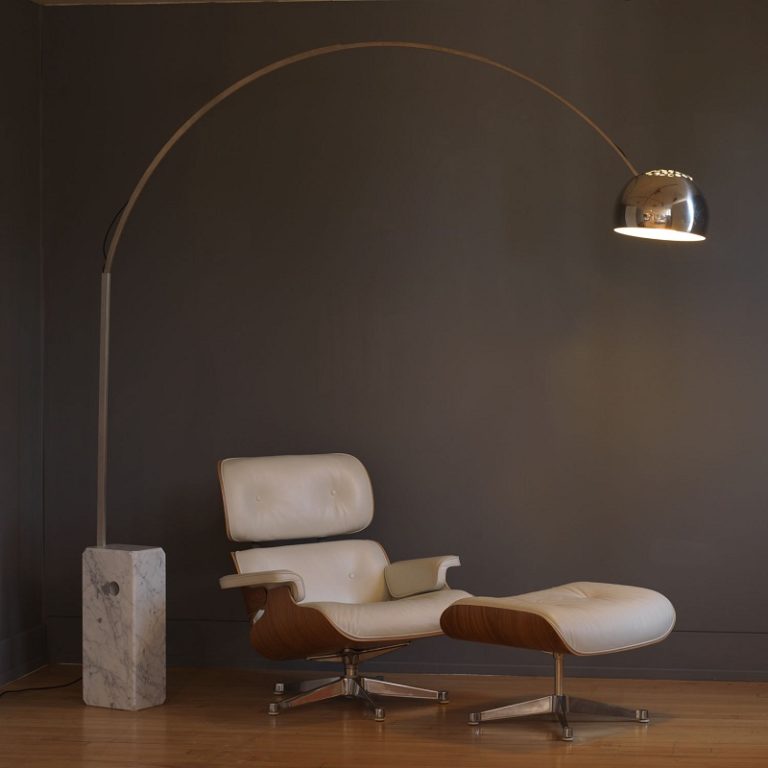 Among other things, Denmark is known as a country of outstanding artists and designers. Among them, an honorable place was taken by Poul Henningsen – a writer and critic, architect and designer and, as he was also called in some publications, “the master of thought and lighting design”. It is to him that we owe the appearance of the famous PH-lamps, which give soft and diffused light acceptable to the eyes due to specific visual and optical techniques.

The first lamp produced using this technology was the famous PH 3½-3 – a chandelier with a unique approach to light rays regulation. Henningsen proposed a lampshade made of two metal and one transparent glass or plastic lampshade. Thus, the light did not hit the eyes but was scattered evenly, creating a pleasant and sufficient, but at the same time not too bright lighting. Five years later, in 2026, PH 3½-3 will celebrate its centenary, but the chandelier still looks very relevant not only in retro but also in modern interiors.

Artichoke appeared more than thirty years later, in 1958, but during this time, Poul had many exciting ideas, which he successfully implemented to create this pendant lamp. True to his conviction (“electricity should give light, but not blind, scatter, but not radiate brightly”), he came up with an original design. The chandelier consists of 12 steel arches, to each of which 6 copper plates are staggered. As a result, the resulting lamp really looked like an artichoke or an open and ripe cone. At the same time, it was amazingly in harmony with absolutely any setting and interior style.

Today the unusual design of “Artichoke” and its moderately bright and comfortable light is appropriate in the living room, in the bedroom, and even in the study or office. Openwork outlines and unique geometry turn the chandelier into a kind of art object that can decorate any room.

The only advice: when buying such a lamp, take care of a reliable fastening, since the weight of individual models can reach 25 kilograms. 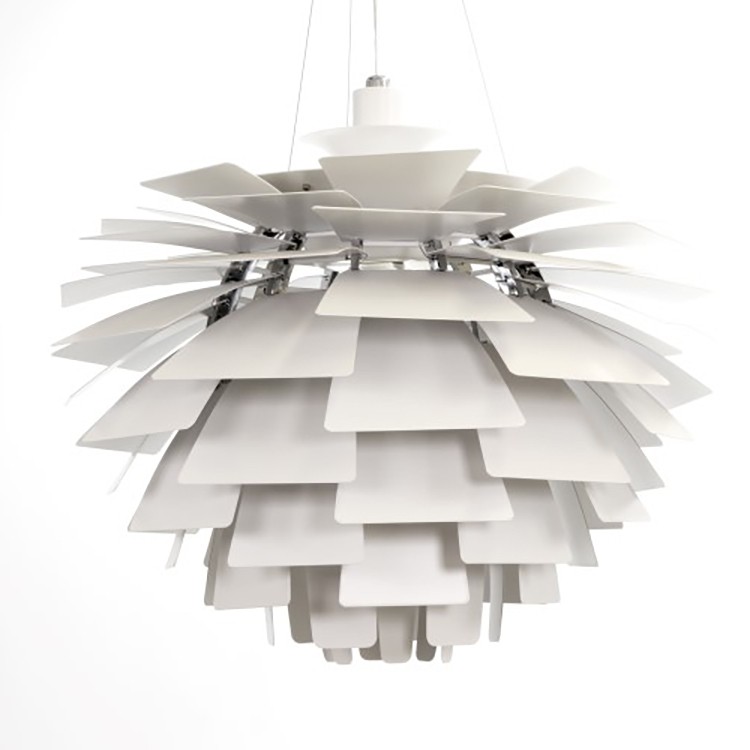 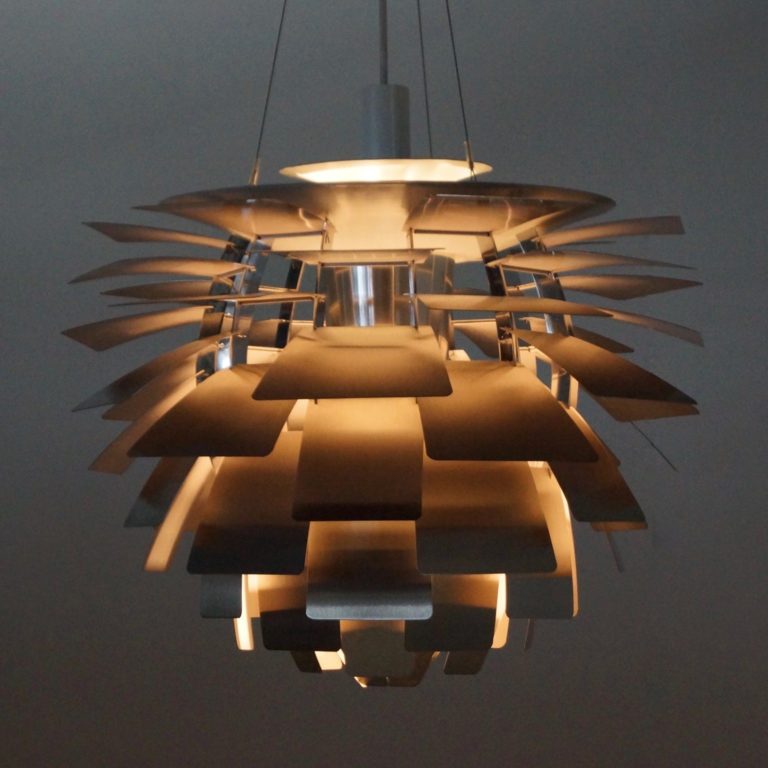 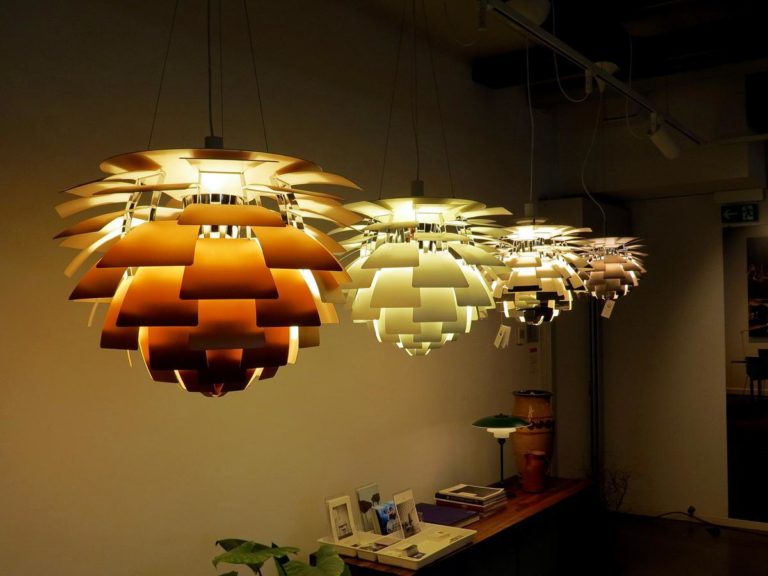 Many of us have probably used table lamps with bending, adjustable bases, and laconic cone-shaped lampshades – and did not even suspect that we are dealing with the most iconic thing created back in 1932. The author of this design was the British engineer George Carwardine, and for purely practical purposes: he needed an excellent drawing lamp.

George patented a spring system that allowed the lamp to bend in several places, adapting the direction of the light flux according to the needs of the painter or reader. Over time, Carwardine’s idea was appreciated not only by engineers but also by representatives of other technical professions, and doctors, and ordinary people. Gradually, new versions of Anglepoise appeared – without or with fewer springs, with various platforms and bases, and even with slightly different lampshade geometry.

Today, such table lamps remain functional and incredibly popular decor, and the variety of colors allows them to be integrated into both progressive and retro interiors. 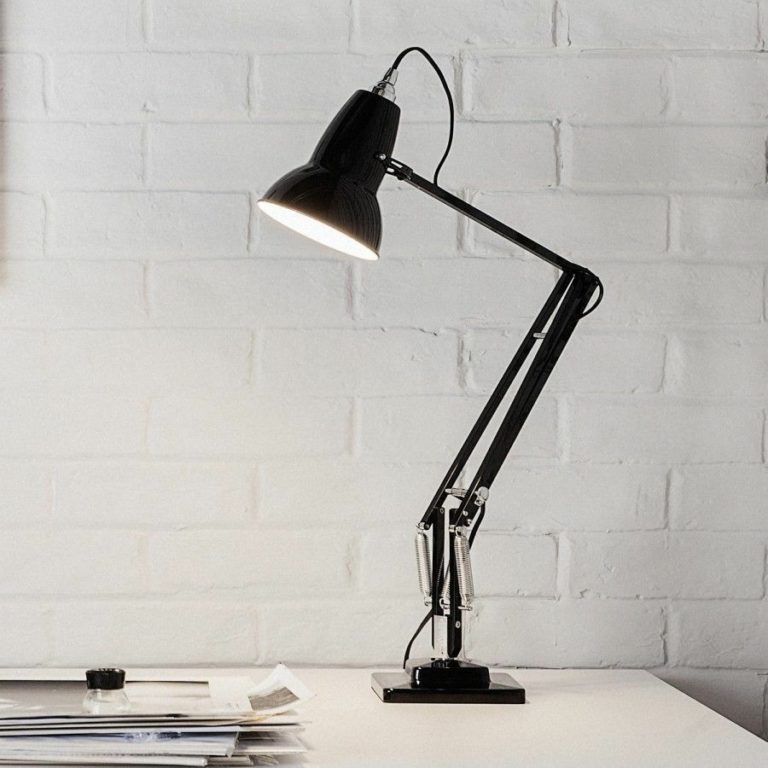 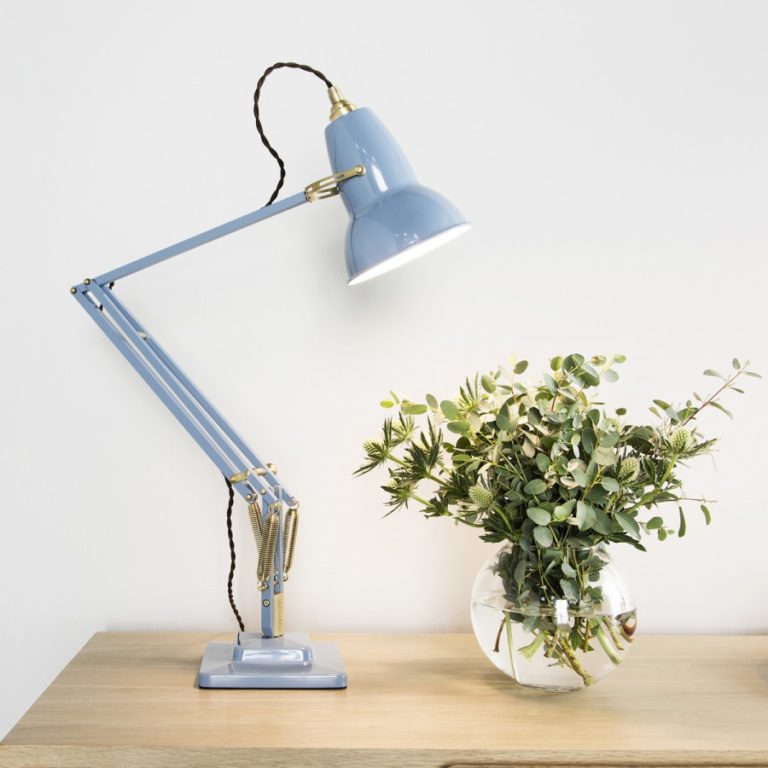 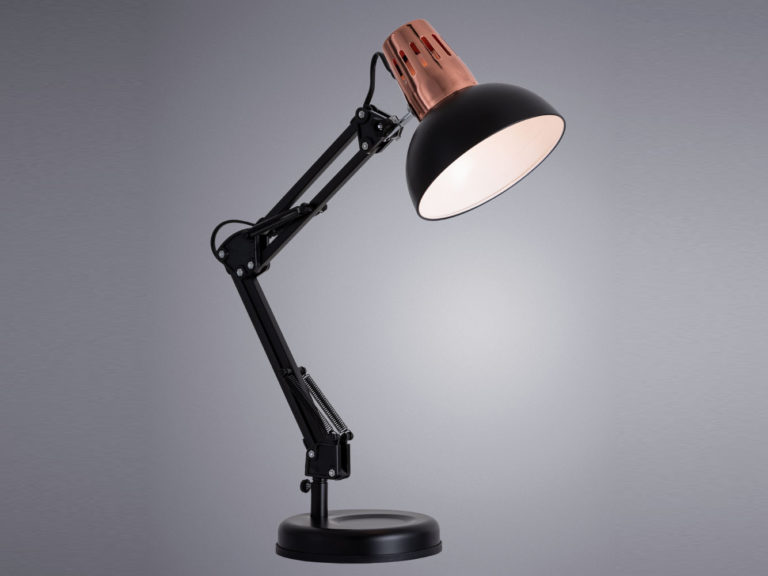 If you have at least once visited the stores of finishing materials and lighting equipment over the past few years, you must have noticed a considerable number of bulbs of various shapes, which are proposed to be fixed in groups on lengthy thin suspensions. This type of lighting has gained overwhelming popularity over the past few seasons, but it cannot be called entirely new since it was invented in the 20s of the last century.

The author of this “chandelier” was Adolf Loos, an outstanding Austrian architect, and designer engaged in prominent projects in Prague, Vienna, and Paris. Loos thought many times about the possibility of using functional and practical decor, until one day, a valuable idea came to his mind. This is how the “spider-chandelier” appeared – several bulbs on long cords coming out of one socket and fixed around it on the ceiling.

Over time, the options for suspension and the shapes of bulbs have become more. The bulbs can be attached to the ceiling and even walls, use a different sequence of fixing the suspensions or simply assemble them into a bundle. For the trendy today loft, minimalism, industrial and retro, invented 90 years ago, Edison Bulb Chandelier has become a discovery from the category of “well forgotten old”. 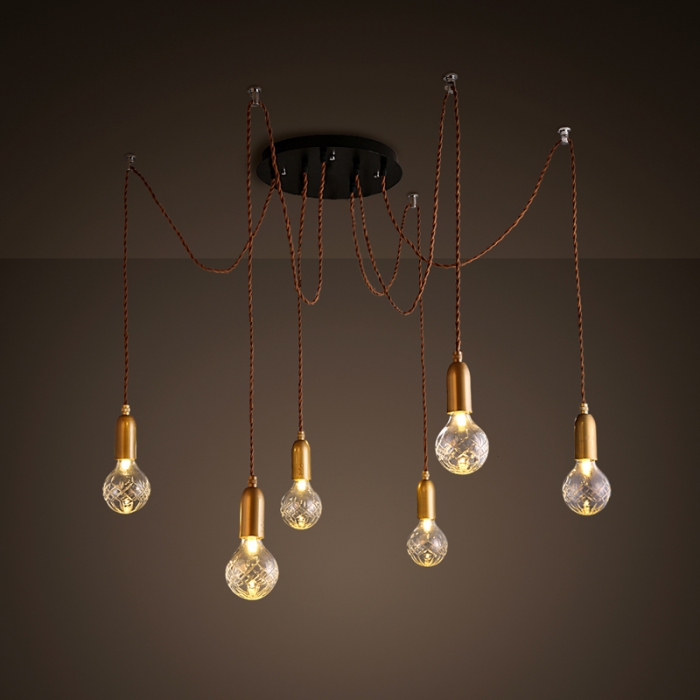 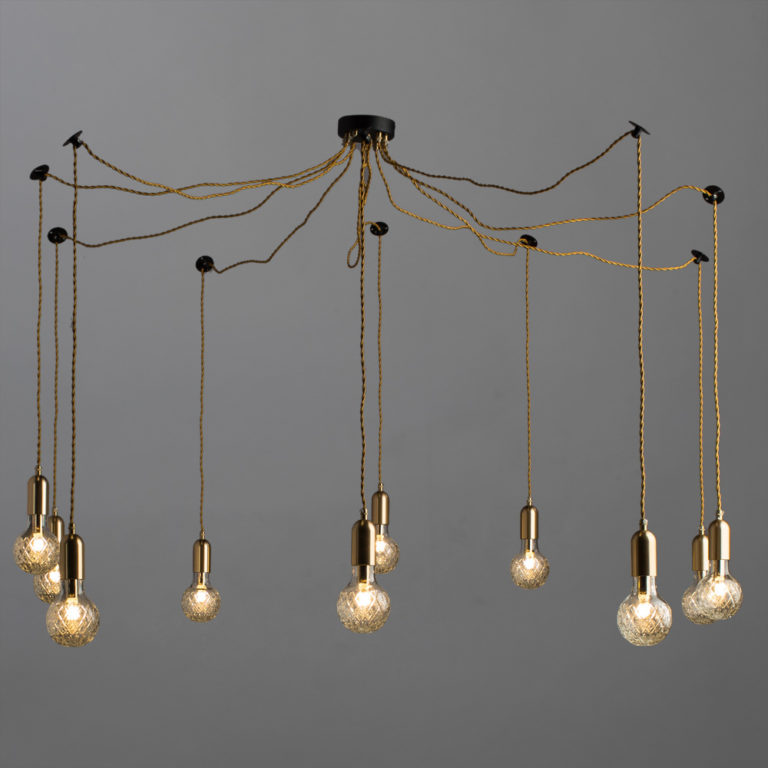 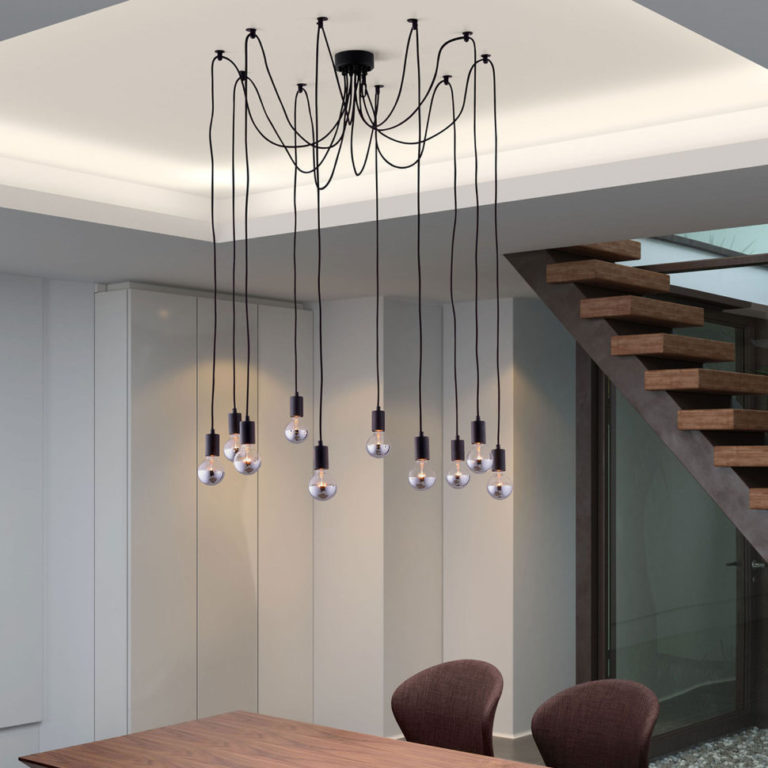 However, this list of iconic lamps is not entirely complete. The legendary Large Flower Pot pendant with metal hemispheres by Verner Panton, paper lanterns and Akari lamps by Isamu Noguchi, Beat lamps of the most bizarre shapes in polished copper by Tom Dixon – each of them has taken its place in history, art museums and, of course, in the most relevant and exclusive interiors. 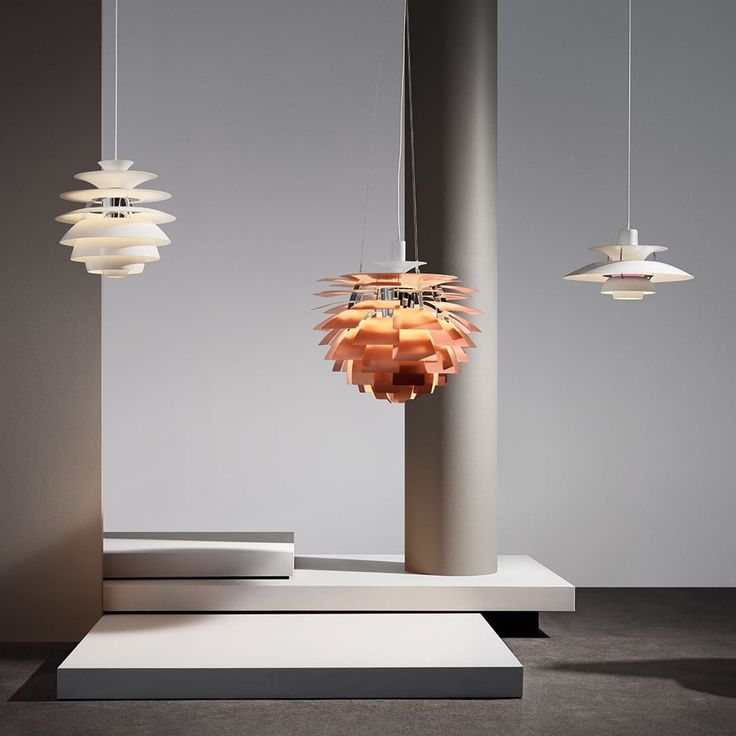 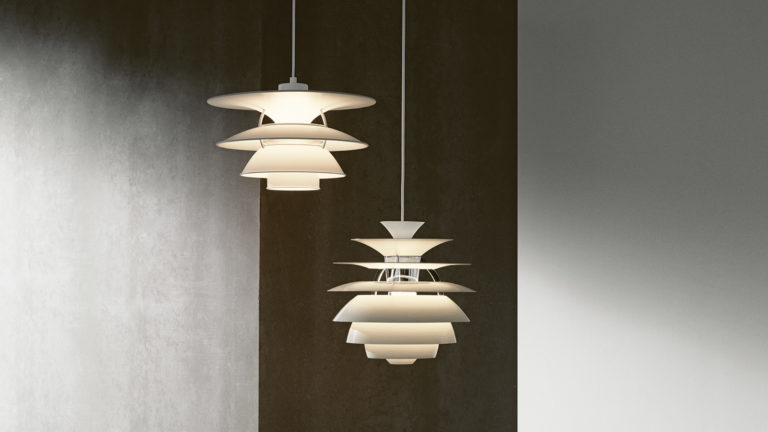 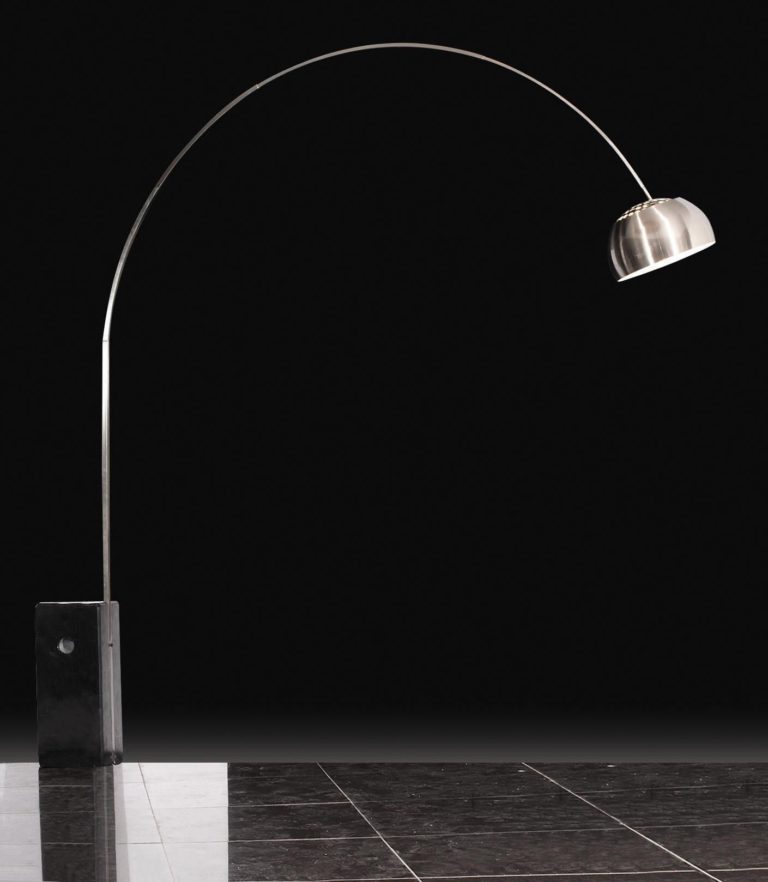 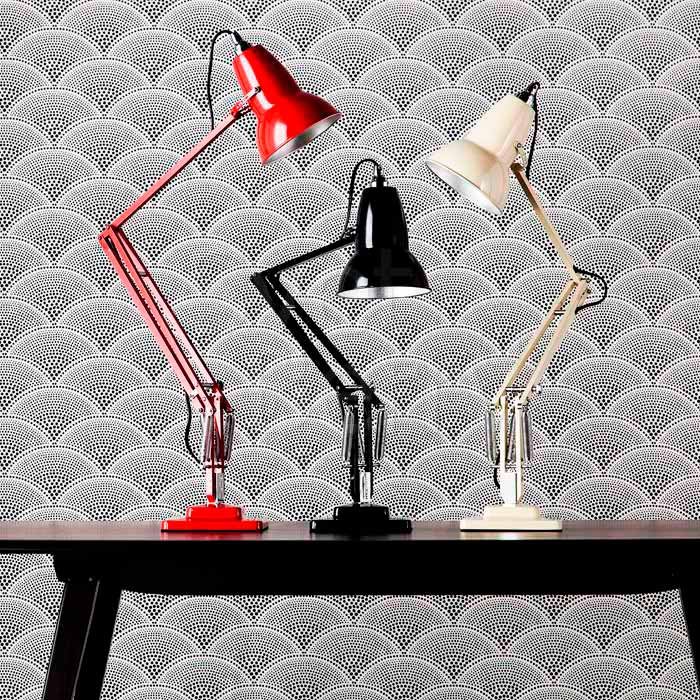 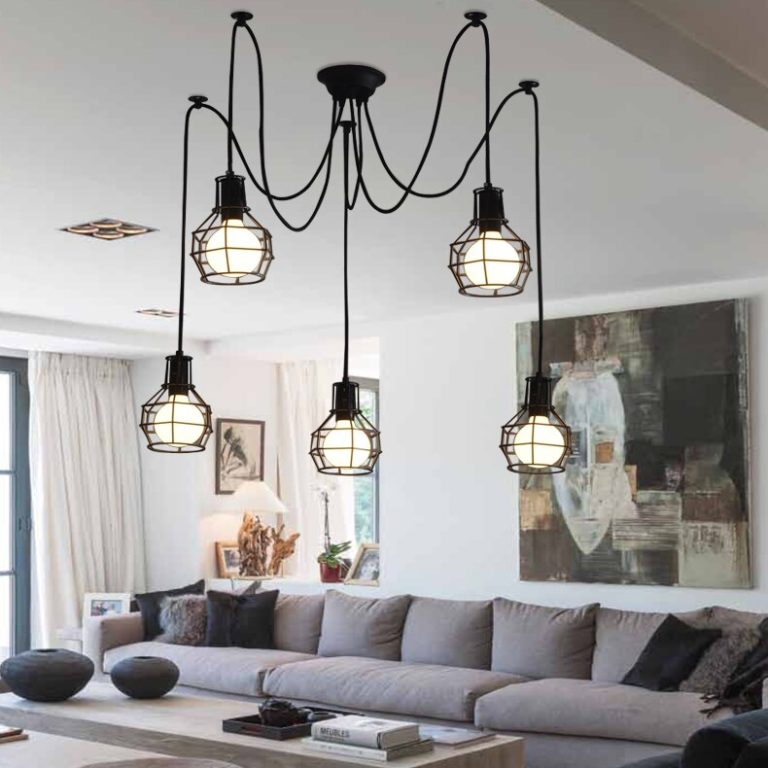 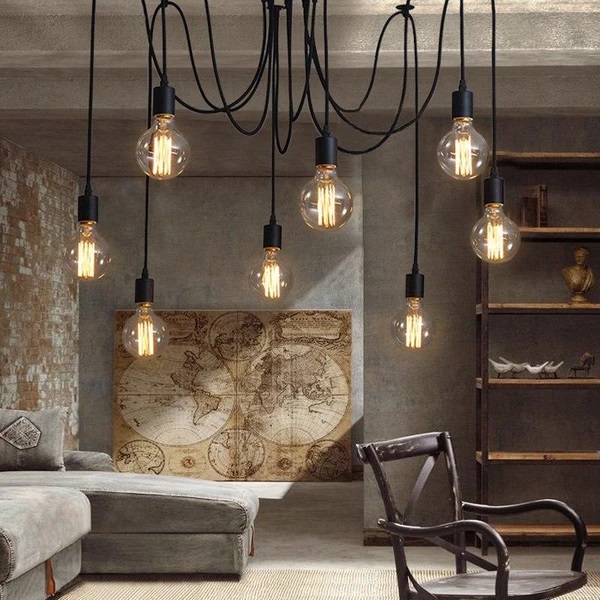