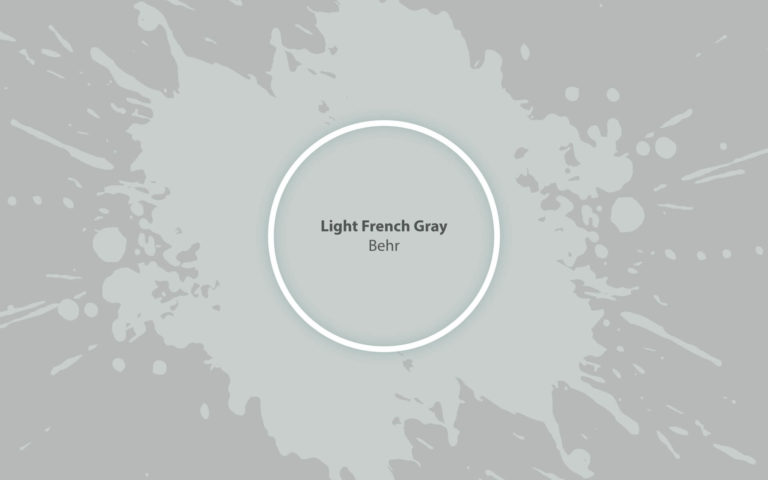 We have previously written about the dominance of blue-gray tones in fashionable palettes for the last two years. The keen interest of designers in such shades is mainly due to significant changes in the usual way of life and the reassessment of values associated with the events of the same two years. Today, we tend to view our home as a small oasis in which we feel safe and can hide from any problems, worries, and difficulties waiting for us outside. And to achieve such an atmosphere, every detail is essential – finishing materials, furniture, the texture of textiles, and, of course, colors.

Blue-gray tones provide the same effect that we talked about just above, as they are calm and serene, natural and mesmerizing. Unsurprisingly, the largest paint manufacturers have already responded to demand and presented their variations of shades, balancing between gray and blue. We propose to evaluate the magic of this balance using the example of shade 720E-2 from the American company Behr, which received the intriguing name of Light French Gray. Perhaps this color will spark your keen interest and inspire, if not for drastic changes, then at least for a minor update.

Already by the shade’s name, one can assume that Light French Gray refers to gray tones. This is true, but the 720E-2 color is fraught with surprises. When you look at it from a certain angle, you risk not immediately realizing its color – gray or blue. Indeed, the blue undertone in this color is quite expressive, but it does not overshadow the gray base but makes it more exciting and mysterious.

If you look at Light French Gray, as designers say, in an ideal environment, without the influence of light and neighboring shades, then you will see its essence. It is a blue-gray shade that appears slightly dusty or washed out, watercolor-like, and slightly cool. This character of the color speaks of its impressive potential: rest assured that you would find many options and uses for it in your interior.

And one more interesting point that we want to tell you about. The fact is that Sherwin-Williams has a paint color with the exact same name – this is Light French Gray SW 0055. By the similarity of the names, it can be assumed that they are almost identical, but this is not entirely true. Light French Gray from Sherwin-Williams is significantly darker (its LRV is 53 versus 61 for Behr paint) and, moreover, it is the most neutral gray, in which there are practically no undertones. The shade 720E-2 is lighter, more ambiguous, and complex, primarily due to the very blue undertone.

Light French Gray: is it warm or cold?

Light French Gray by Behr is one of the glorious representatives of gray, and therefore it looks calm, restrained, and cool. This feeling is reinforced by the blue tones already mentioned above. All these features make it possible to refer it to cold colors, but visually it looks somewhat soft and moderately refreshing.

You have probably already guessed that Light French Gray is exceptionally rich in undertones, and one of the manifestations of its complexity is its ambiguous behavior depending on the lighting. When choosing this paint for your interior, be sure to consider how much the surface painted in this color will be illuminated; otherwise, the effect will be completely unexpected.

Light French Gray can appear as a very light, even pale and cool gray in intense daylight or bright sunlight due to its high enough lightness. The soft natural or artificial light of medium intensity will bring out its pleasant blues to the surface, which will become deeper and darker as the lighting fades. If there is not enough light at all, or you use bedside lamps or sconces with soft dimmed light, it can manifest itself as an even and neutral gray or warmer due to minor brown tones.

The 720E-2 Light French Gray by Behr boasts a ratio of 61 LRV to the light color group. This means you can confidently use this blue-gray to paint the walls in a room you want to brighten and make more spacious: painted surfaces reflect daylight or artificial light and achieve the expected effect.

If you plan to use Light French Gray in a room with insufficient lighting, then do not forget that it will look much lighter in a room with a bright palette than in a room dominated by dark tones.

We don’t think it’s worth mentioning the pronounced blue undertones of this mysterious gray from Behr since enough has already been said about them. However, it makes sense to note that Light French Gray has some brown and green accents that make this color a friendlier and softer color for all its coolness.

Light French Gray is one of the most beloved representatives of the blue-gray family. We can assume that we can find similar tones to it from different paint manufacturers, and SW 0055 will be one of them. However, the color from Sherwin-Williams is still quite far from this shade from Behr, and the manufacturer offers much more similar tones to it. However, first things first.

Behr’s Light French Gray is relatively neutral but tends to be more light or cool and rich. Behr designers have developed ready-made palettes that will help you create the basis for a stylish interior, in which you can feel comfort, freshness, and coolness:

Use of Light French Gray in interior and exterior

One can hardly imagine an interior in which Light French Gray would be inappropriate – perhaps it will do honor even to the high-tech style, which welcomes the purity of shades and sharpness of lines. Once in a room in which this gray-blue color from Behr is the base, it is impossible not to appreciate the atmosphere of lightness, freshness, and at the same time an amazing sense of security and hospitality. Of course, you can easily fall in love with such a color – and let’s look at a few ideas as an example of what such falling in love can lead to.

The interiors of elegant houses on the American coast gave a powerful impetus to the development of a new style, which at one time managed to outshine even the super-trendy nautical. Light Blue French Gray promises to be the perfect color to decorate a house or apartment in a similar style. Its mysterious depth is characterized by sophistication and light bliss, the feeling of a pale sky under the bright sun, and the coolness of a light breeze. When decorating interiors in a coastal style, you can use the shade from Behr as a base or as an accent for furniture or textiles. 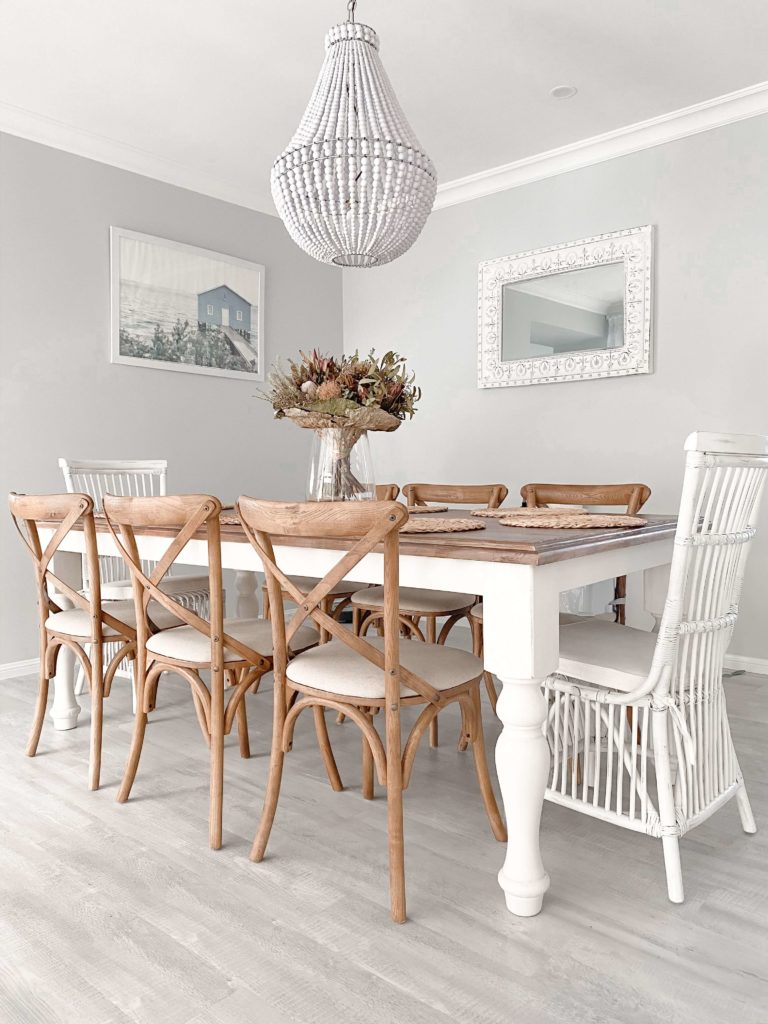 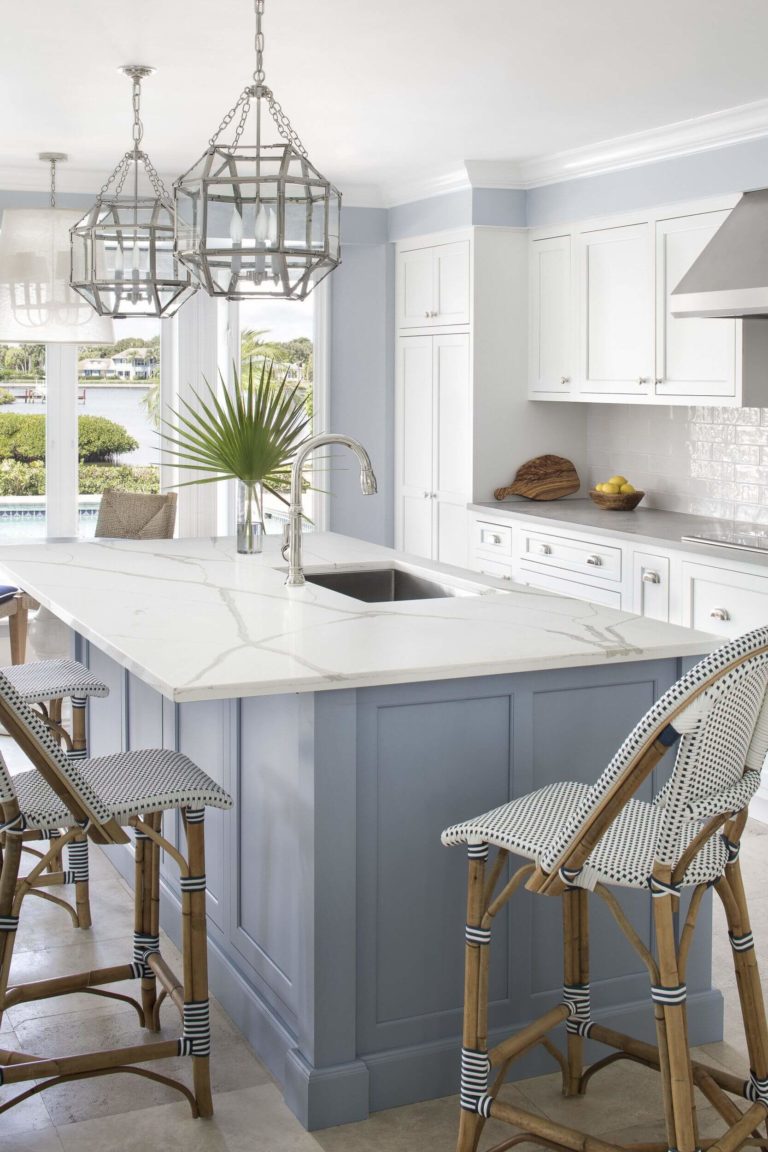 For a hospitable home

Designers love to use Light French Gray to decorate hallways and halls. A particularly successful combination is the blue-gray paint by Behr and shiplap – in this case, you can find the perfect balance between farmhouse style and modern manifestations of comfort. Complement this dusty blue-gray with light and cool wood furniture, striped beige textiles, wicker storage baskets, and green plants or flowers in clear glass vases. 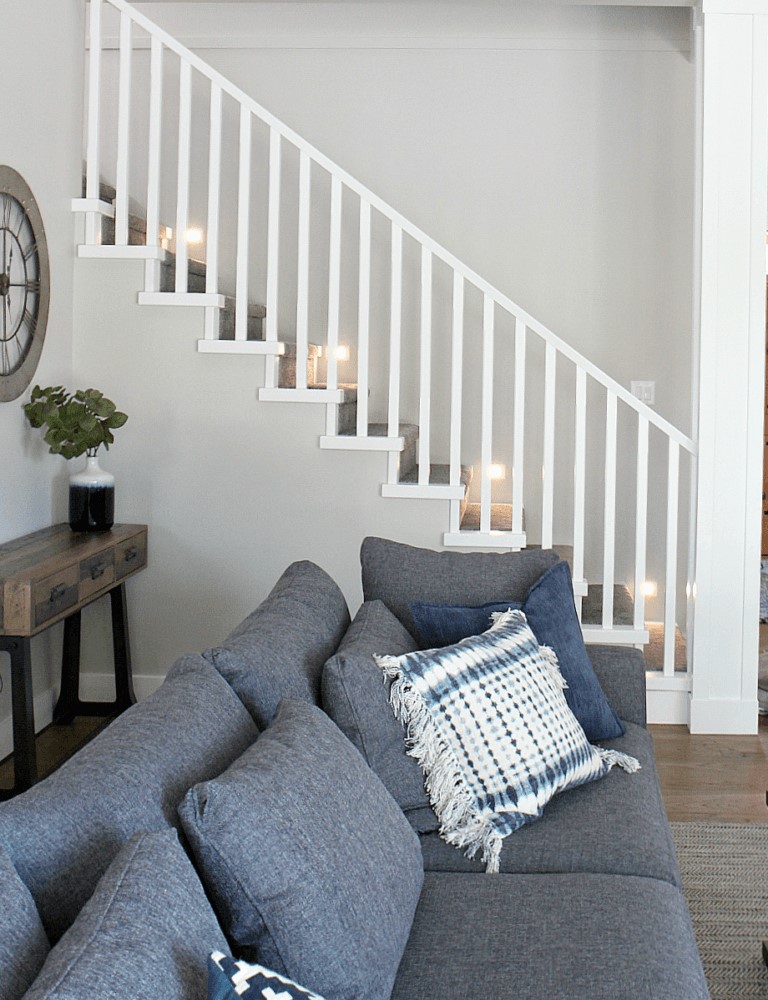 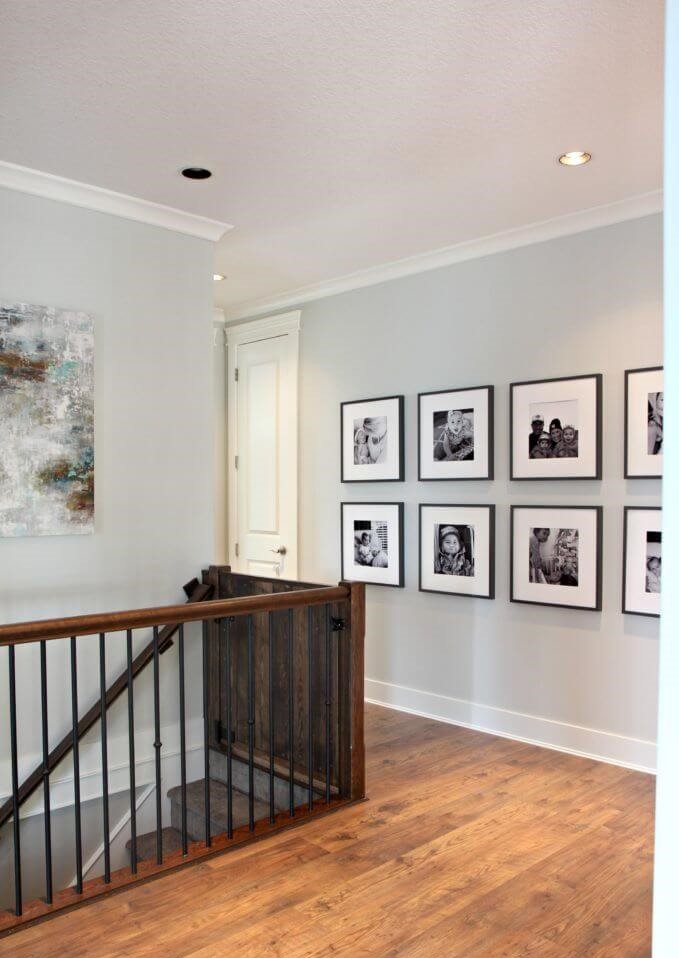 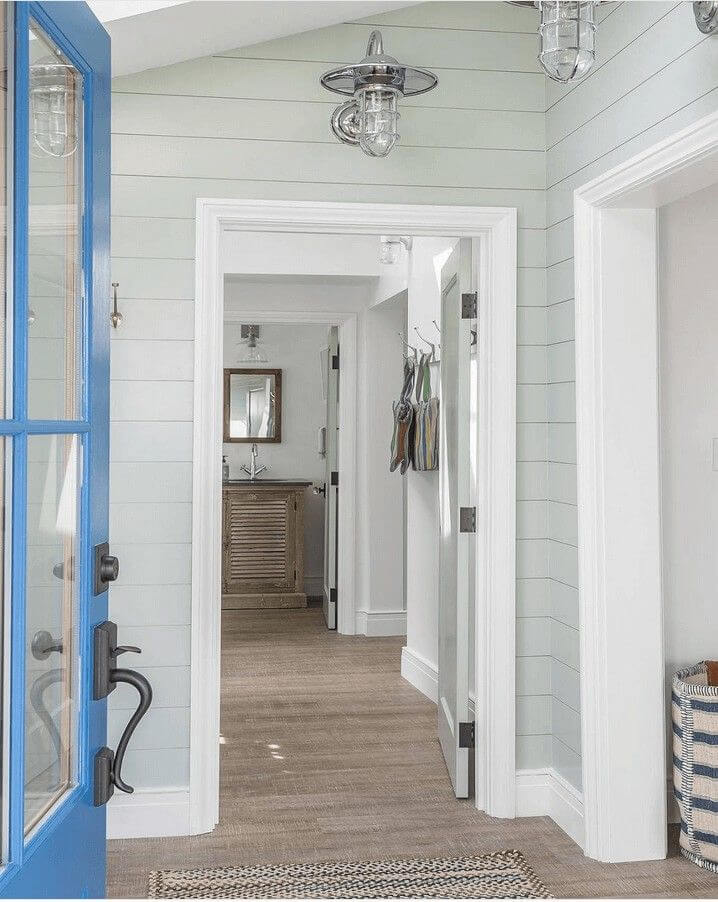 Whether you want a French country style bedroom or living room, Behr’s 720E-2 shade can bring a more modern look to your bedroom while retaining the charm of the past. Its calm and muted coolness will play a good match with the furniture in light colors and with a brushing effect, elegant decoration, and wall decor, as well as natural textiles in a reasonably large check pattern in gray tones. Each time you are in such a room, you will feel how slow the passage of time is. 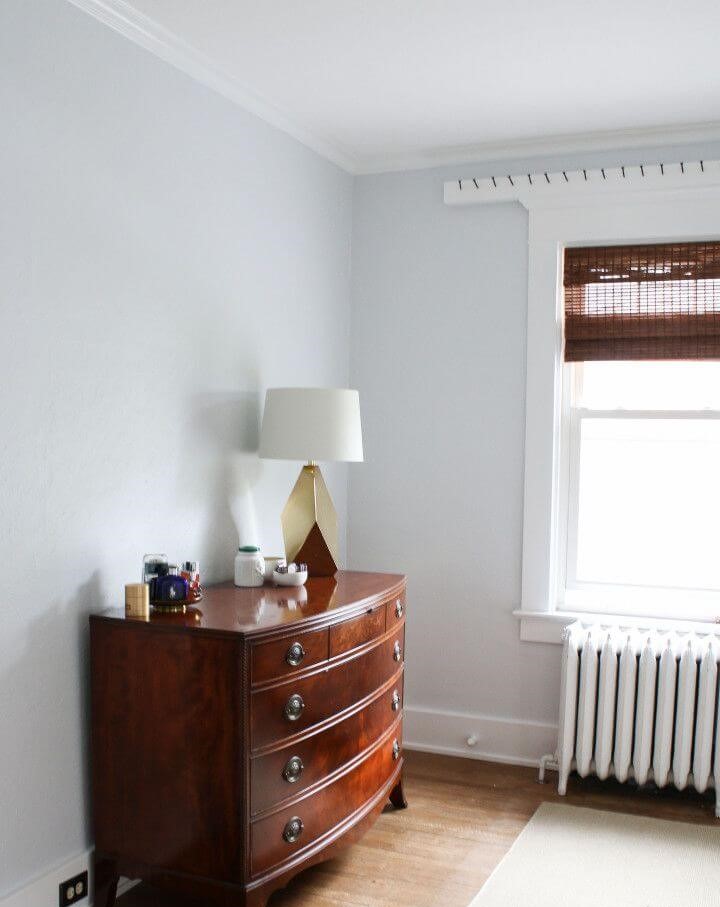 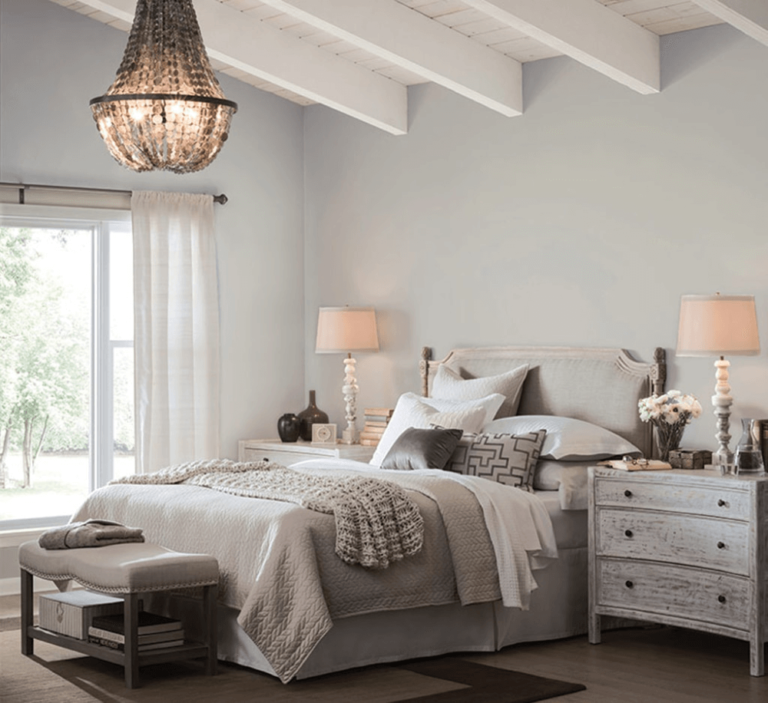 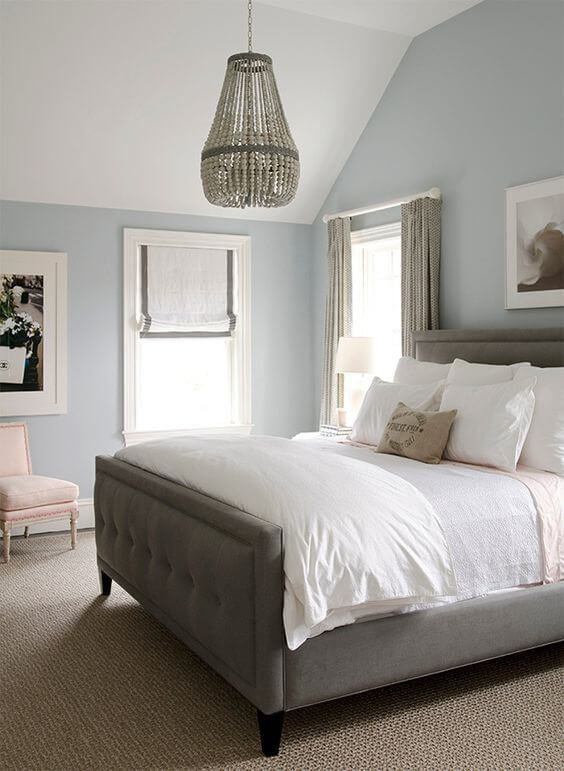 If minimalism and Scandinavian style are your things, and you would like to decorate your kitchen in any of these styles, Light French Gray can be a valuable find for you. This shade is so self-sufficient that it does not require any additional details – it creates a coherent and harmonious interior by itself. Use it for kitchen cabinets or walls – in the latter case, even open shelves against such a background will look textured and stylish. Also, don’t forget about retro-style appliances and white ceramic dishes. 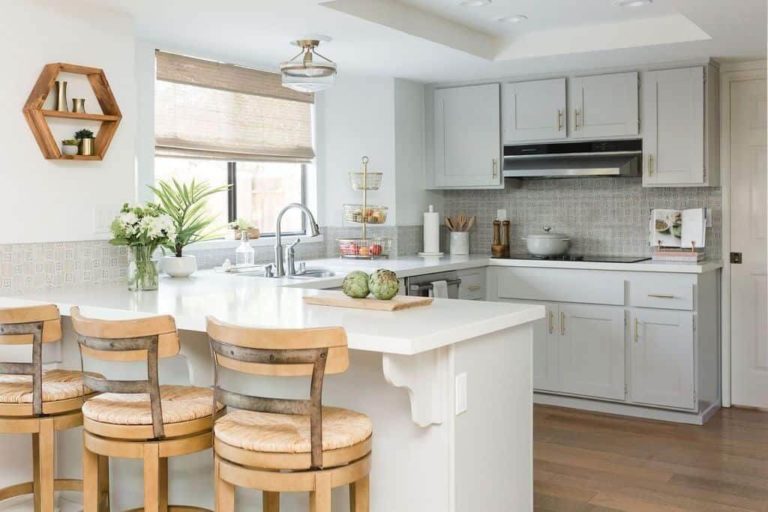 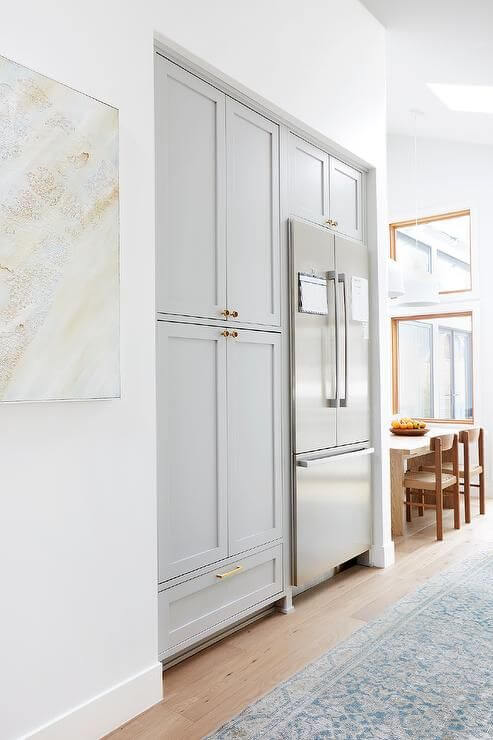 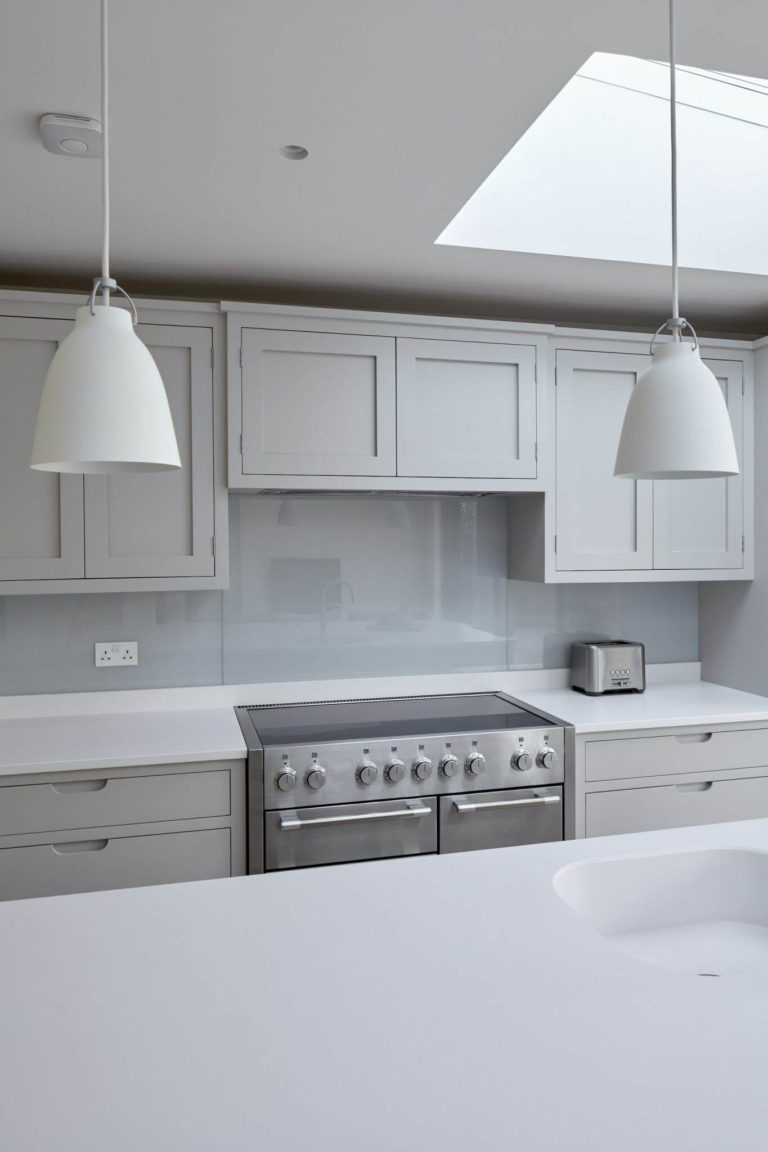 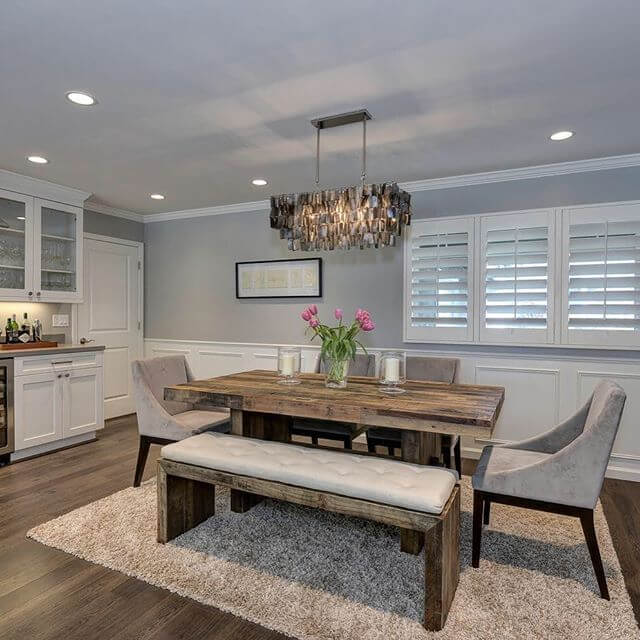 Mystery and ease, elegance and freshness – the blue-gray shade by Behr will help you bring together these contradictory concepts in the interior of the bathroom. Using Light French Gray as your base color, add brass fixtures, a curly mirror, light moldings and baseboards, and a light marble countertop. Modern chic is more effortless than it sounds. 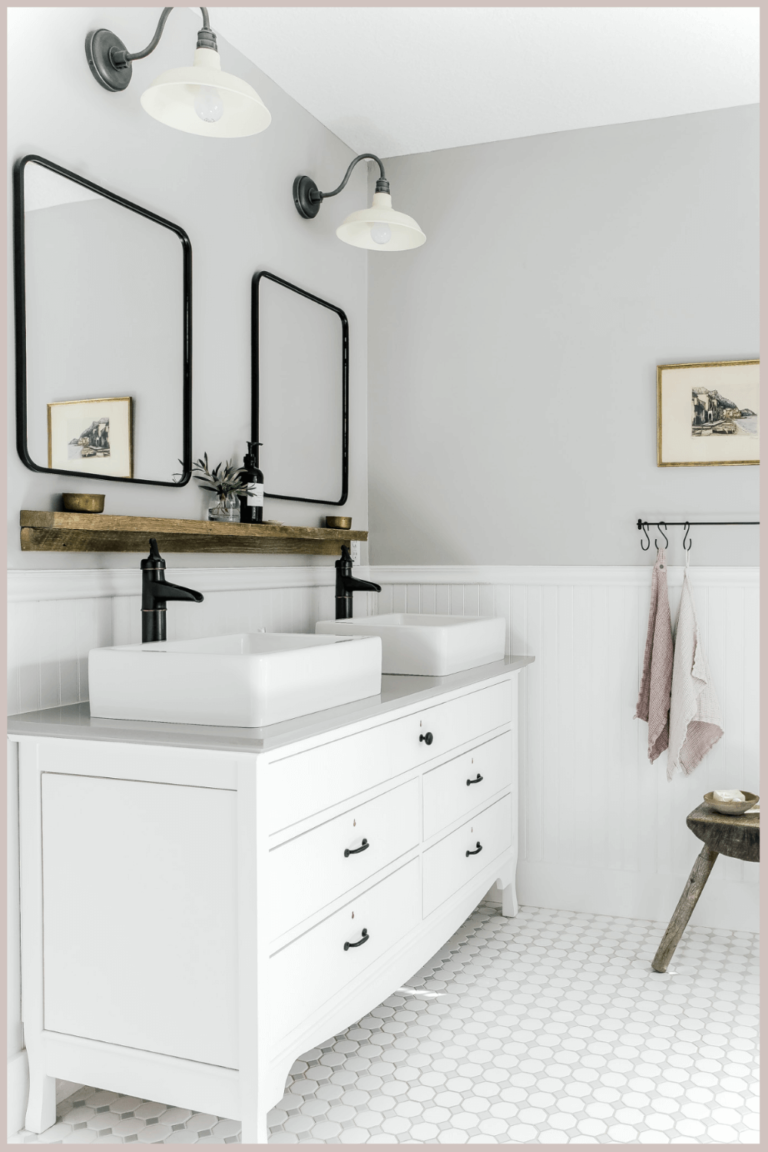 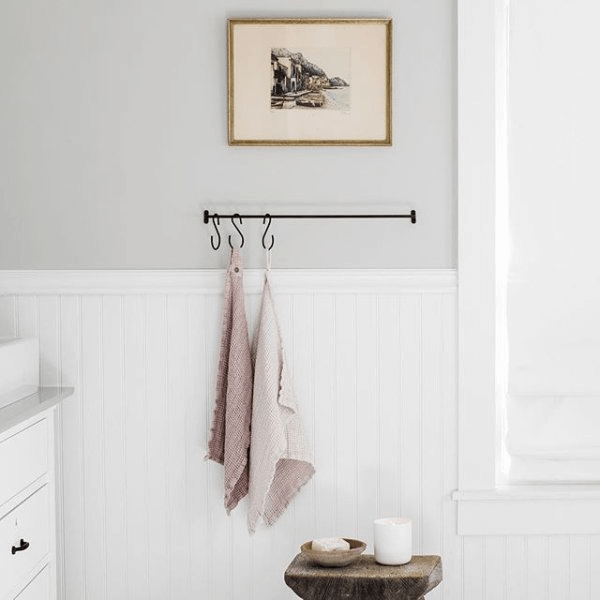 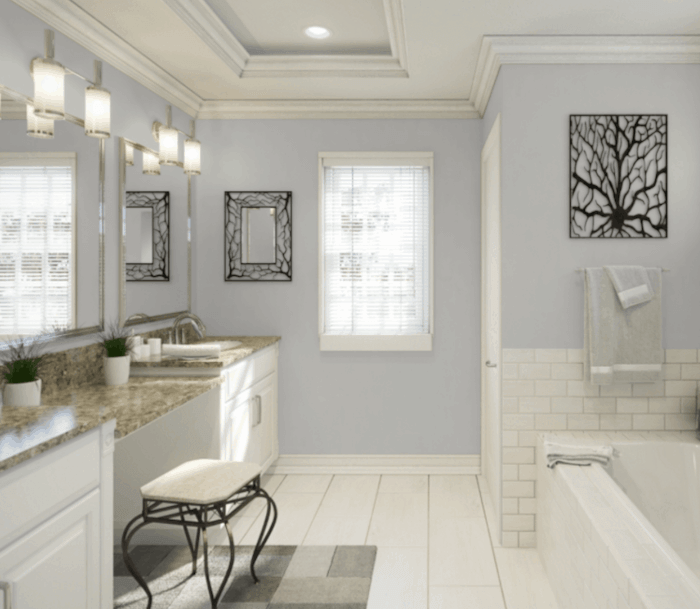 For the exterior of the house

We won’t be surprised if you have to put in a lot of effort to keep from painting your front door in Light French Gray. But is it worth it? A door painted in this shade looks traditional and, at the same time modern, moreover, it perfectly harmonizes with both bleached brick and wooden walls. Throw in dark wrought iron hardware and a couple of floral lawns, and the elegance of your home will delight anyone. 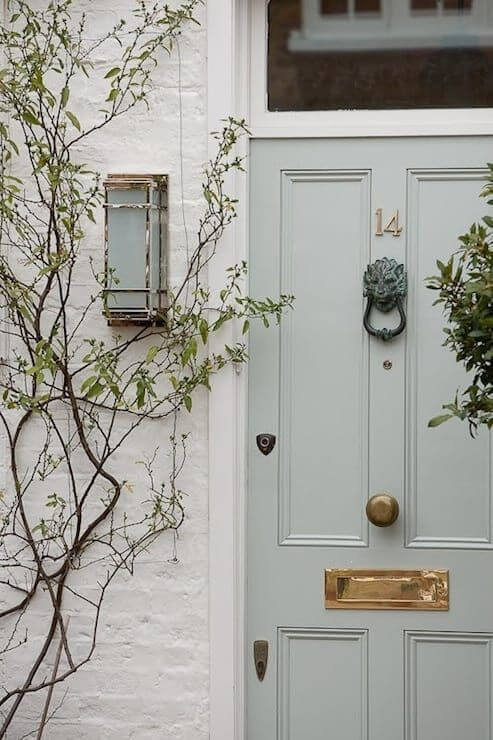 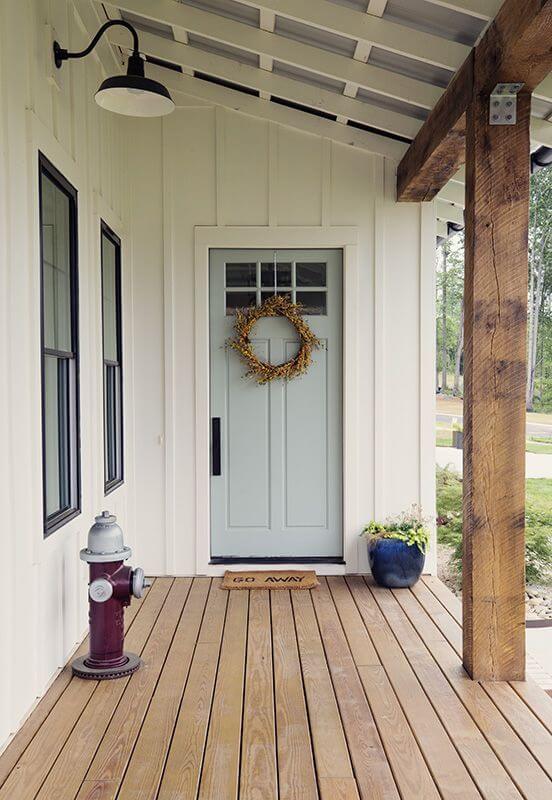 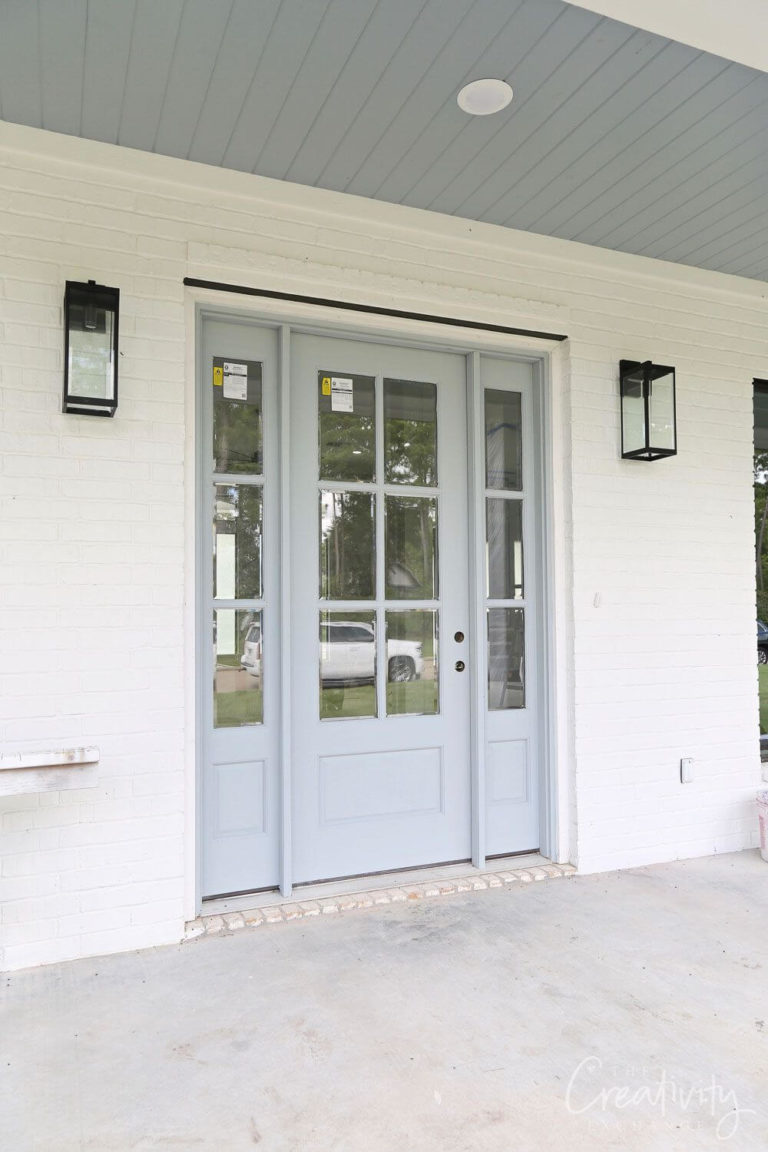 Painting the house in this shade is also possible, and here you can choose from two options. If your home is closer to classic, try Light French Gray combined with white architectural elements. However, for a farmhouse or Mediterranean style house, you should opt for dark, including dark brown, details of the facade – this will make the silhouette of the building clearer and the appearance – expressive and interesting. 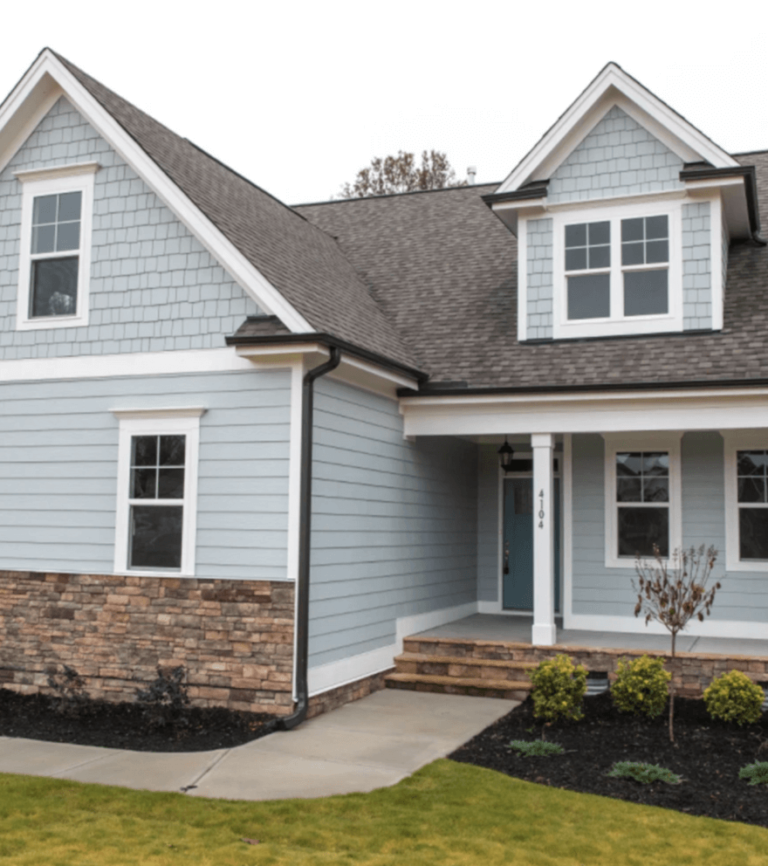 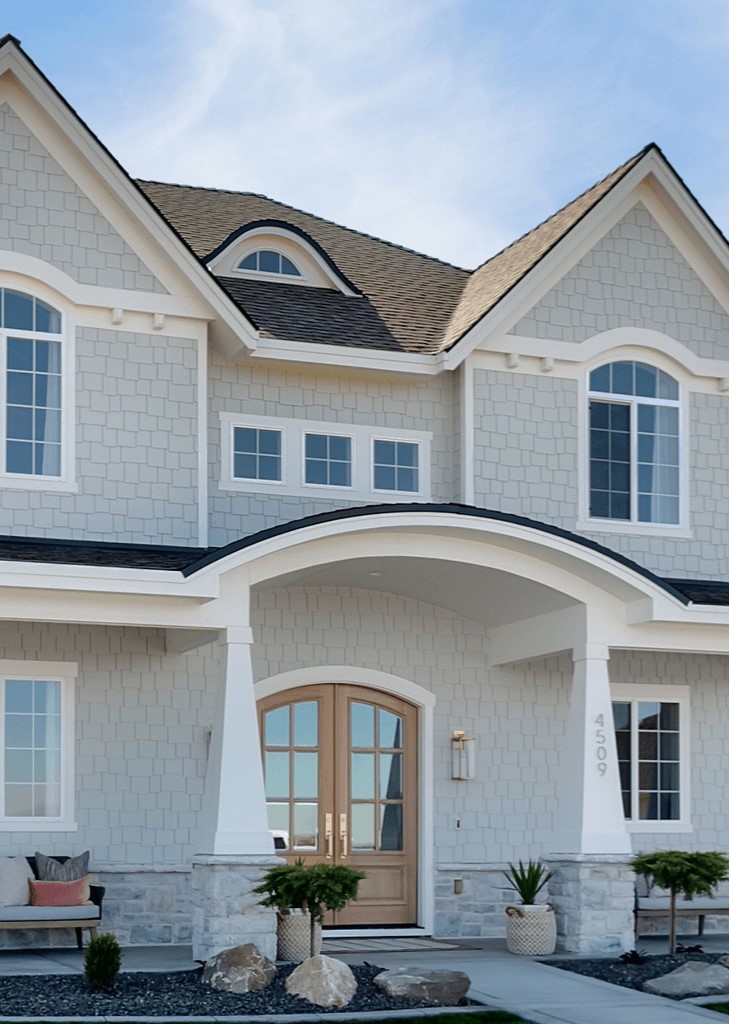 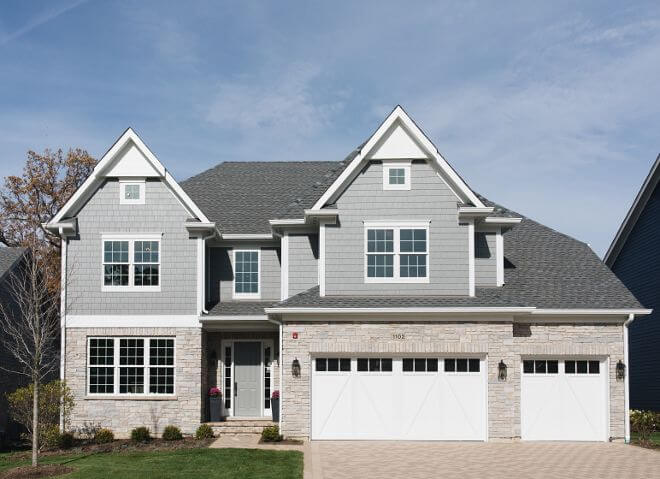 Light French Gray by Behr is a blue-gray shade, all the charm of which lies in its rich undertones and fantastic ability to reflect light. If you are looking for a way to combine modern laconicism and sophistication of the past in your interior, this should not be left without your attention.