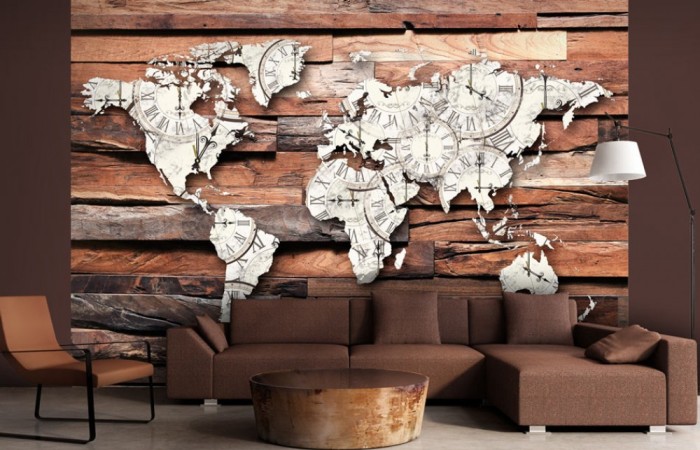 Murals photo wallpapers in the form of world maps at interior

Murals photo wallpapers in the form of world maps at interior

Many ways have been invented to create accents inside: multicolored wallpapers, canvases with different patterns and photo wallpapers are used. Canvases can be an interesting solution, which not only portrays a beautiful, but also a useful picture that contains interesting information. For example, world map wallpaper can be a great solution for decorating a wall in a child’s room, an office or even a living room.

In this article, we will explain how to use wallpaper with maps inside your rooms, what they are and why they are in constant demand.

Exquisite interior with wallpapers with a world map

First of all, I want to emphasize that the tradition of placing various maps on the walls of the room is a long-standing tradition, although for some reason it is considered by many to be a modern trend. Since people actively study the planet by trying to draw maps, they post their best practices on the walls of residential buildings. Nowadays, with the development of printing, we can hang in our room absolutely any map of paper or other modern material.

Most often, these murals are placed in the children’s room, since such a wall design will be not only original, but also useful. A child can always explore the world around him, learn about the location of the main geographical objects without leaving the children’s room.

Murals with a similar pattern placed inside perform several functions at once:

In addition, if adults are rather stingy with emotions, children’s wallpaper in the form of a geographical map will probably be more pleasant. It is perhaps for this reason that this solution is often used in the interior of children’s rooms.

Another powerful argument for placing such designs on the wallpaper in children’s rooms is information and a simple way to get the basics of geography without leaving the room. The fact is that in today’s realities, access to information is open to everyone, you can find the necessary material on the Internet in a few minutes and read it. But at the same time, this quickly received information is just as quickly forgotten and therefore does not stay long with you.

At the same time, the constant presence on the wall of wallpaper in the form of a map of the world will interest him, will study the main points, for example, the names of the oceans, continents, the location of large countries and of famous cities.

If the child wants it, his fast absorbing brain absorbs a huge amount of information. Anyway, at the school of geography, he will be able to easily navigate through the information received, and he will already know some basic things. It would not be difficult for him to show on a map the approximate position of the well-known country and its capital. What can I say, the educational moment in the placement of a world map wallpaper inside the children’s room is certainly present.

But we do not exclude the decorative component, because wallpapers with a world map can very well be used in different rooms: 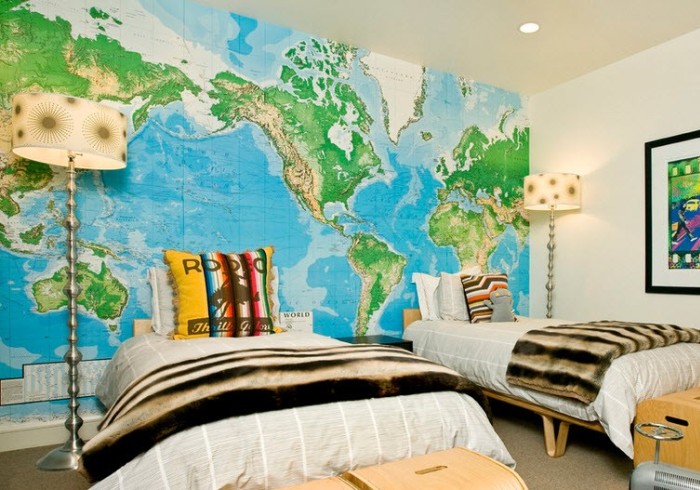 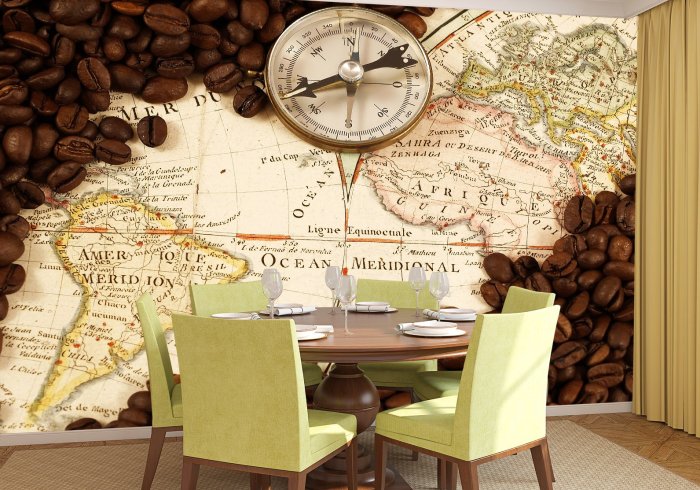 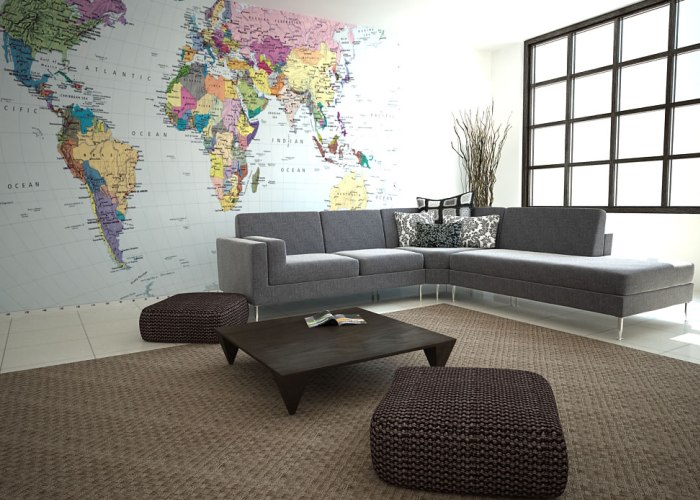 If we consider this photo wallpaper not only as a geographical assistant for the child, but also as a decorative element in its own right, it is important to note that there are a large number of their varieties. At the same time, for almost any interior, you can choose an appropriate option. What can we choose from: 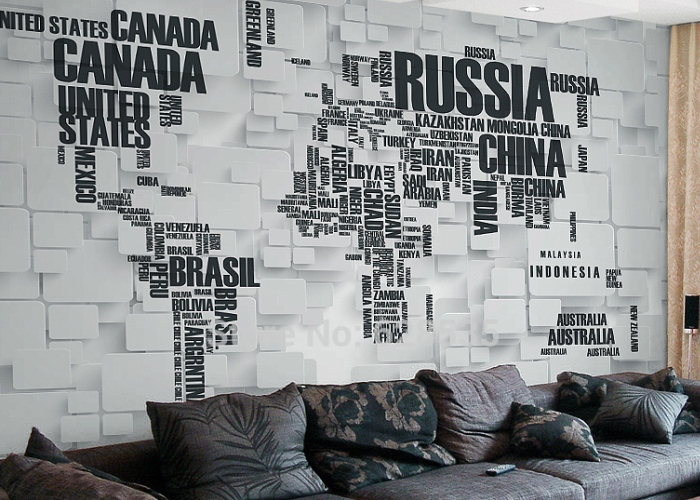 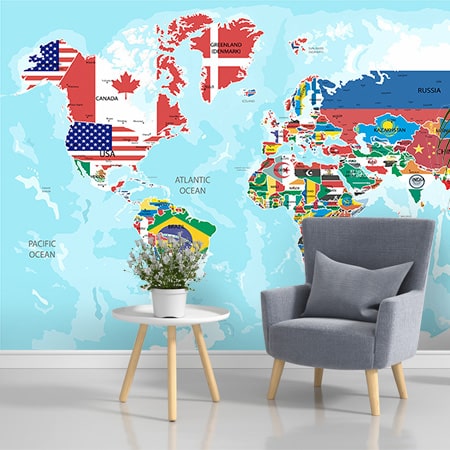 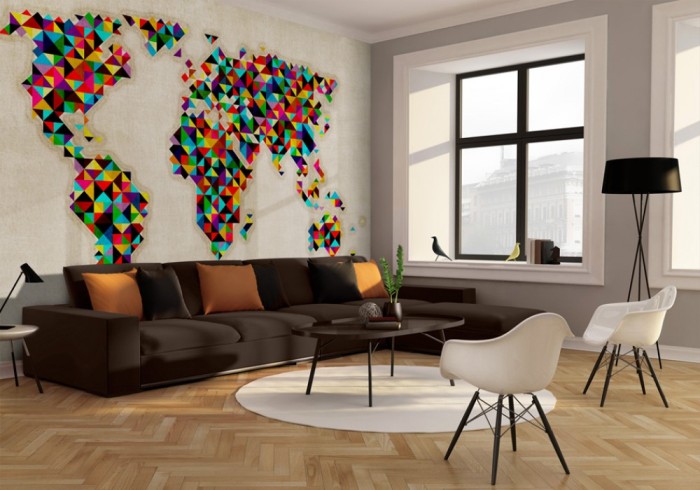 You can choose wallpapers with a similar image for almost any style. For example, for a minimalist hi-tech technology, an Art Nouveau style map is perfect, where the territory of the countries is indicated schematically by its name, or for a classic interior, you can choose a photo wallpaper with a map of the ancient world.

When designing a children’s room, one of the criteria for choosing photo wallpaper is the choice of a plot or an image, because the visual effect is very important for the psychological state of the baby. The color, sharpness and appearance of the image affect the subconscious, contribute to the development of the child of certain tastes or traits.

Wall mural Map of the world soothes and predisposes to a dream atmosphere, which can appear in the desire to travel, to discover, to search for something new. A child can plunge into an unforgettable world of adventures, discoveries of unknown countries, and his imagination is capable of drawing amazing images, which he will embody later in his work. Children are more easily acquainted with a romantic and adventurous atmosphere than adults. It is therefore justified to place this type of wallpaper in a child’s room.

Also don’t forget the cognitive side of this type of wallpaper. Nowadays, unfortunately, the interest in books and literature, the knowledge of basic things, is decreasing in young children and in school. The era of new technologies and new gadgets has led the Internet to overshadow the print media, and quick and easy search for information has become the norm. A huge map of the world in front of a child’s eyes is a fascinating search for cities, continents, rivers, lakes, etc. Awakening interest in such things is a very significant contribution to the development of a small personality. 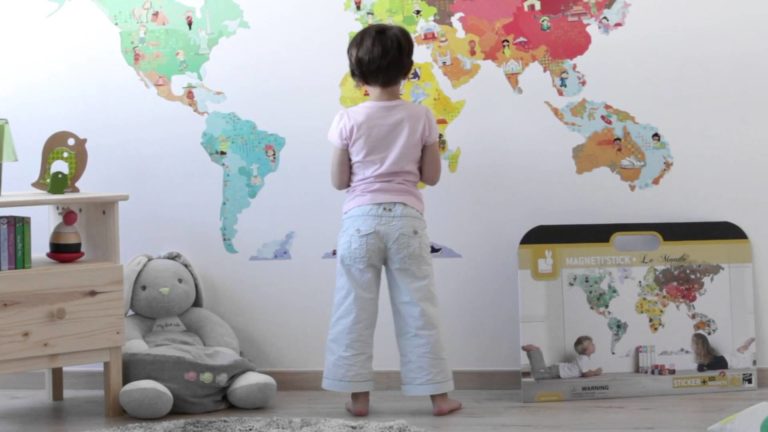 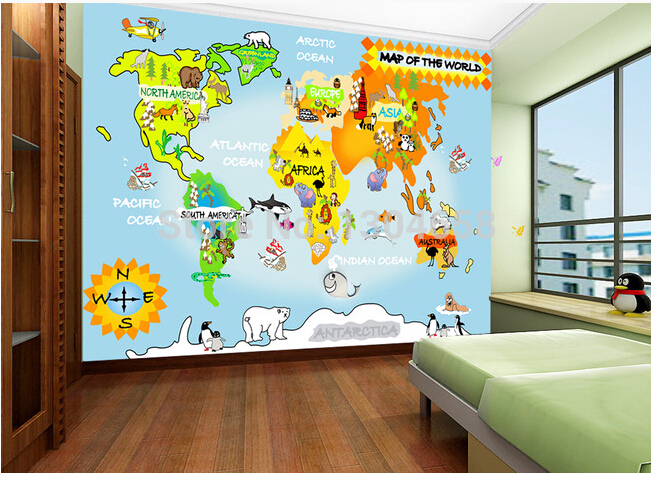 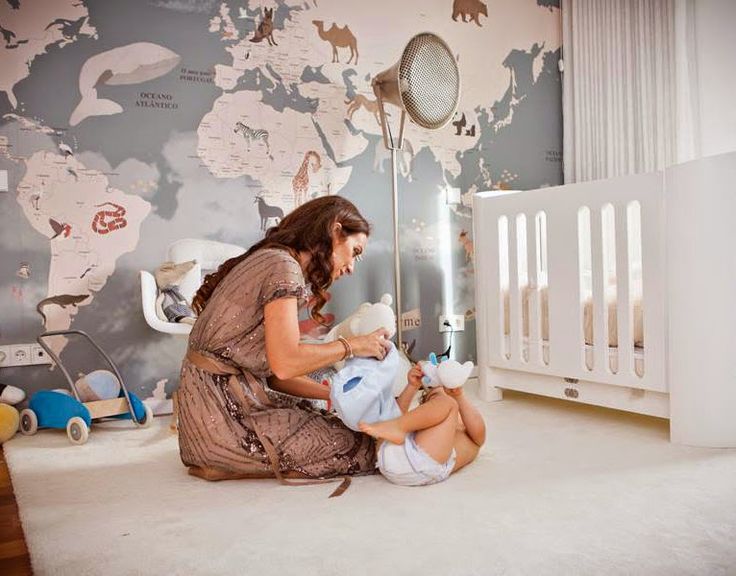 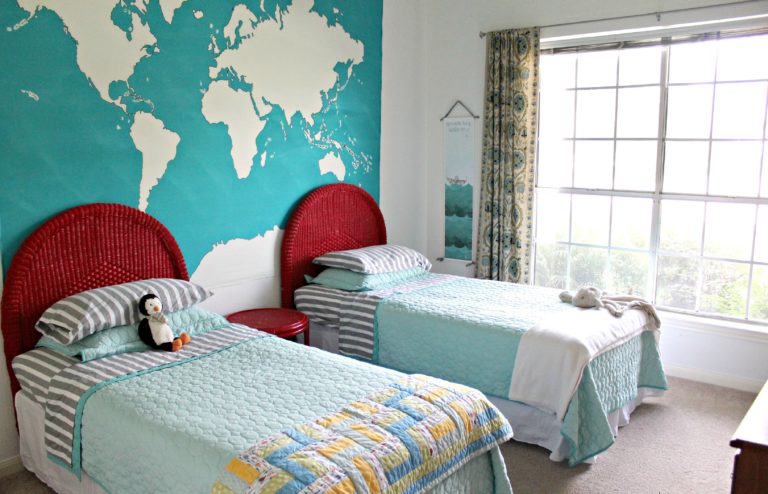 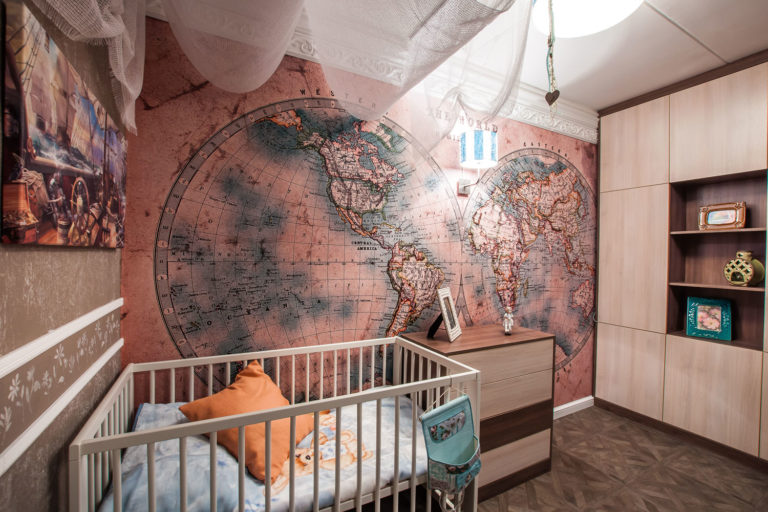 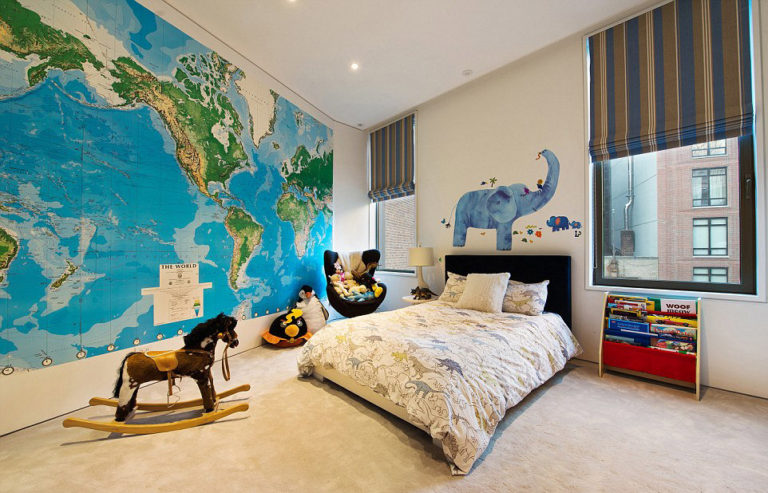 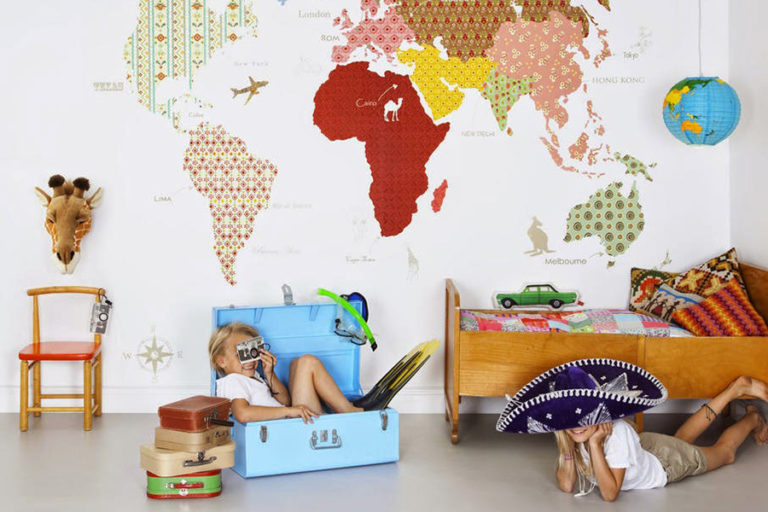 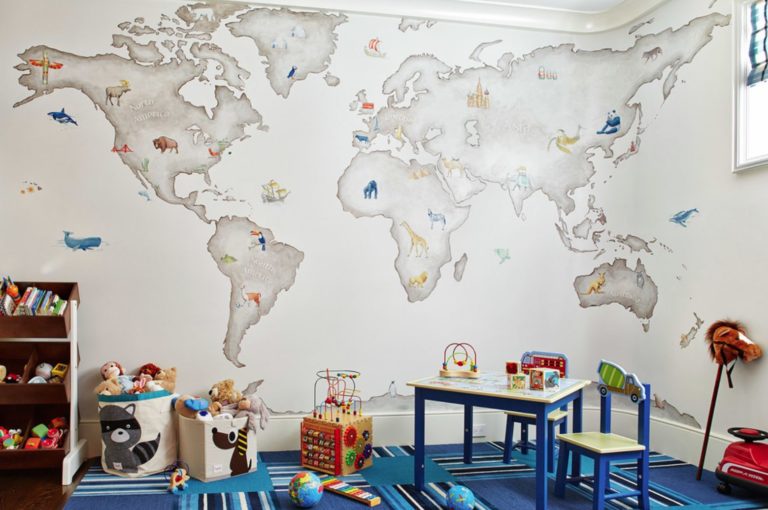 As you can see, a wide variety of photo wallpapers with maps allows them to be used in any room. If such an interior is more educational in children room, it will be more decorative in the living room or bedroom. 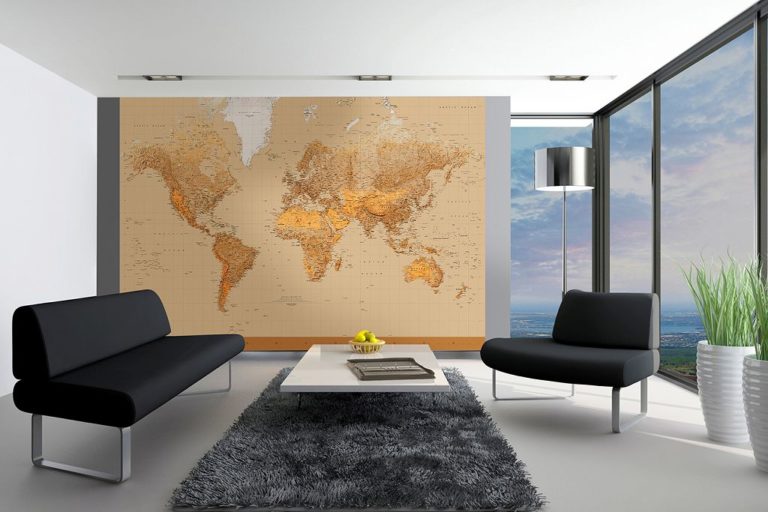 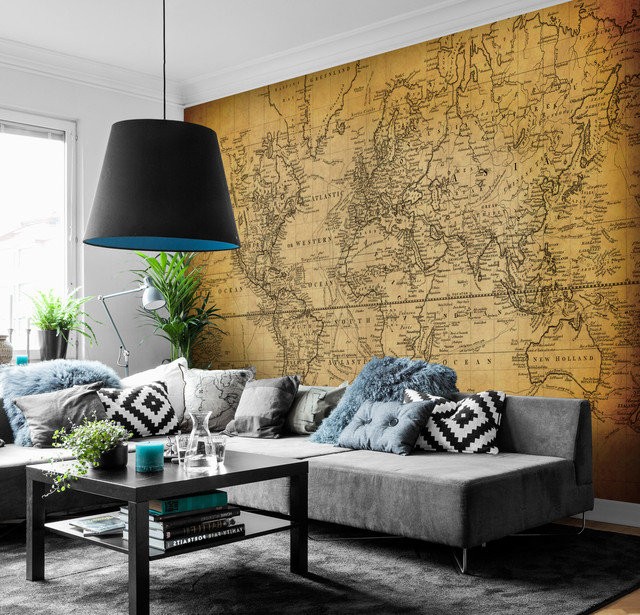 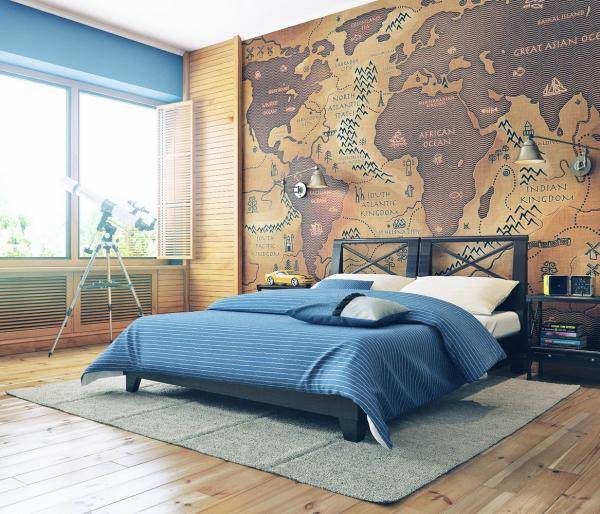 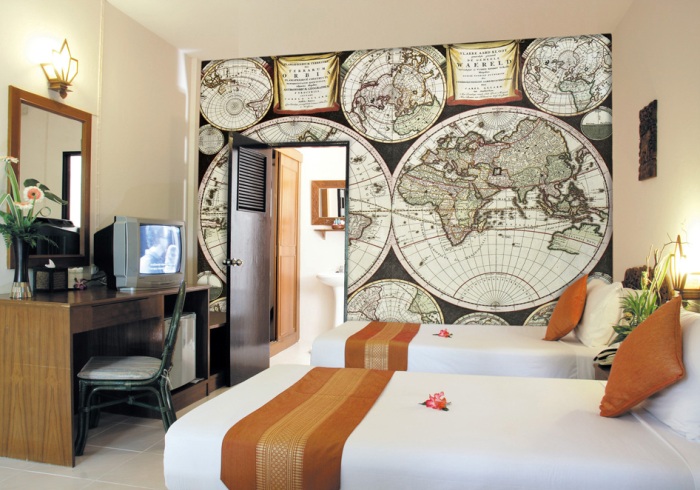 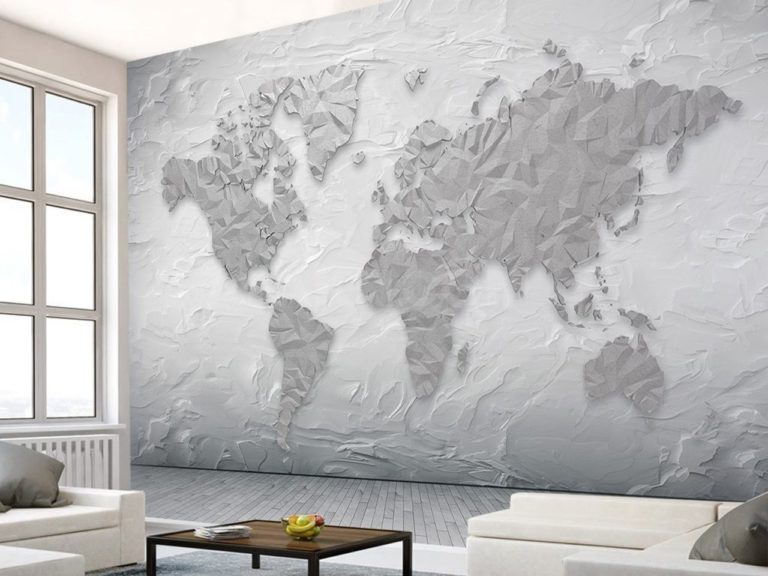 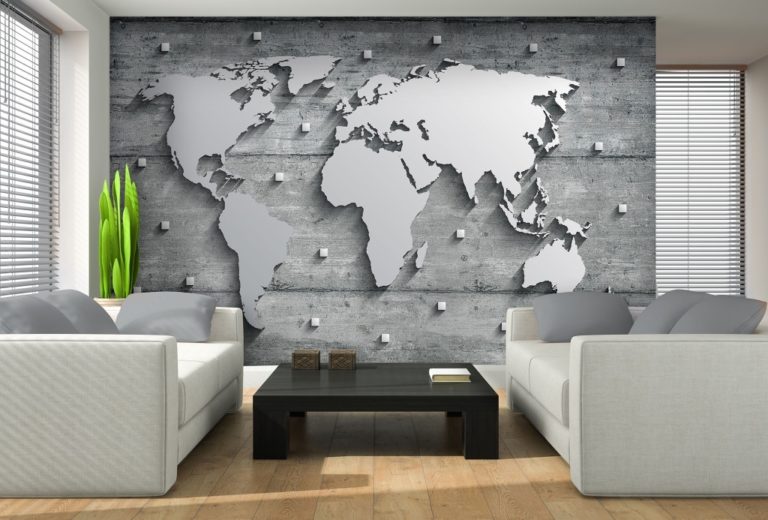 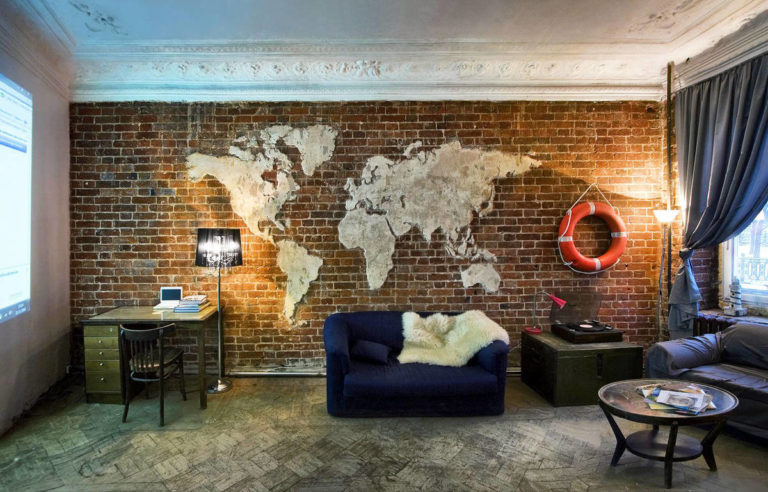 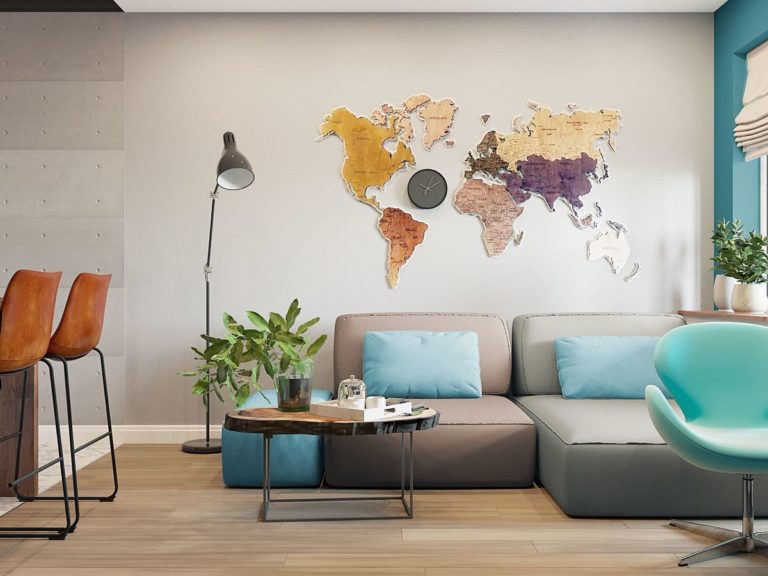 Liquid wallpaper for wall decoration: what you need to know about it?